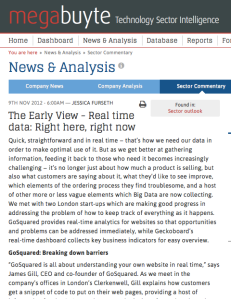 The Early View
Real time data: Right here, right now
Quick, straightforward and in real time – that’s how we need our data in order to make optimal use of it. But as we get better at gathering information, feeding it back to those who need it becomes increasingly challenging; it’s no longer just about how much a product is selling, but also what customers are saying about it, what they’d like to see improve, which elements of the ordering process they find troublesome, and a host of other more or less vague elements which Big Data are now collecting. We met with two London startups which are making good progress in addressing the problem of how to keep track of everything as it happens. GoSquared provides real time analytics for websites so opportunities and problems can be addressed immediately, while Geckoboard’s real time dashboard collects key business indicators for easy overview.

GoSquared: Breaking down barriers
“GoSquared is all about understanding your own website in real time,” says James Gill, CEO and co-founder of GoSquared. As we meet in the company’s offices in London’s Clerkenwell, Gill explains how customers get a snipped of code to put on their web pages, providing a host of information for the GoSquared servers: who is the referrer, how long do they stay on the page, what are they doing there, and so on. The information provided is similar to that from Google Analytics and Adobe Omniture, concedes Gill, except that the bigger players process the data as hourly jobs and give you it later, while GoSquared provides information on the fly.

“Often you want to see what’s happening right now. How many visitors are currently on the site? That blog post you wrote ten minutes ago, is it really popular right now or is it failing? What can you do about it? Has someone just written a negative article about you that needs addressing right away? We focus on that real-time side, rather than the historical stuff, so we can provide you with the information when you need it most.”

GoSquared’s software comes with some clever social integration tools. For instance, if a customer is moving through a website and hitting a stumbling block, such as a UK user facing a form asking for a US zip code, this can be picked up on and help can be offered via a pop-up window. “The cases where our clients have had the most success is on ecommerce checkout pages and customer support forums,” says Gill. “We’re trying to bring the site owner and the visitor closer to one another, to break down the wall between the two.”

GoSquared is now used by 20,000 sites after “fantastic” growth, says Gill, who co-founded the company with his friends James Taylor and Geoff Wagstaff when they were teenagers. Initially the company was a tool for buying “squares” of advertising, and the analytics software was conceived as a side project before its popularity turned it into the main product. The founders initially wanted to put the company to the side and go to university, but thought better of it after being approached by Passion Capital. “We weren’t looking for investment at all. We were well and truly off to university when Eileen [Burbidge] got in touch and said she wanted a chat,” laughs Gill, still just 21 years old. The company, which now employs ten people at Passion’s office space at White Bear Yard, has since raised a second round from Passion and Atlas Ventures.

GoSquared won’t divulge too much about finances, but Gill confirms they are making money: “We have decent revenues coming in; a good proportion of our 20,000 customers are paying and our revenues are going up and up every month.” The company is now focusing on moving the lower-paying customers up the chain to more revenue-yielding subscriptions. Running as a monthly pay-as-you-go model with discounts for long-term commitment, the cost depends on the number of sites a customer has.

While some experimentation is taking place, GoSquared currently doesn’t spend much on advertising. “A lot of [our core audience] has been built up through our blog, Twitter and Facebook, and through encouraging our existing users to promote us to their friends.” This kind of organic customer interaction is something GoSquared’s own product can help companies do as well; if a visitor lands on a website via a Twitter link, GoSquared won’t just name the referrer but also find the tweet so it can be responded to. “You can’t fake it on Twitter. You can’t buy your way into places like that, it has to be organic,” says Gill. “I think Twitter users are becoming more savvy when a company’s trying to sell you something versus helping you.”

Geckoboard: Eyes on the road
Like the dashboard of a car, Geckoboard presents vital business information at a single glance so users don’t have to trawl around looking for it. “It’s a living thing. The dashboard is constantly updated, meaning it’s more like a vital signs monitor on a patient, as opposed to a morgue report after the patient has died,” says Paul Joyce, CEO and co-founder of Geckoboard, as we meet in their Shoreditch office. “With Geckoboard you can see the moment your servers have gone down, the moment you get a spike in users, the moment when your sales have gone through the roof. And you can see that in real time and make decisions based on that.”

Geckoboard offers native integration of a range of well-known apps, such as Google Analytics, MailChimp, PayPal, Facebook and GoSquared, to name just a few. The system works by adding a widget to the data source, allowing Geckoboard to pull in the data. “We’re betting big on Saas. Every time we integrate with a Saas-based system we can effectively cover all the requirements of those customers,” says Joyce, adding how Geckoboard will also allow users to push their own internal data to the dash, such as Excel sheets. While there is no exchange of money taking place when external data makes its way onto Geckoboard, there is an all-around benefit due to the increased lock-in: “If someone’s looking at their web analytics data next to their sales data, for example, you get more independent on seeing that data. You can make out patterns, you can see where things go wrong or right,” says Joyce.

The product was initially aimed at SMEs, but Joyce says they are now seeing interest from government agencies and large enterprises, “so we think there’s room to explore”. The group is bringing in money but is also still burning money, says Joyce; Geckoboard has about 1400 paying customers and the number is “growing nicely”. Joyce, who founded Geckoboard alongside Rob Hudson in 2010, came up with the idea while working as an ETL developer designing data warehouses for large financial institutions: “I’ve always been interested in making that complex, drawn-out process faster so business people can see the data they need to use in a much faster way.” Joyce developed the first version of the product using his savings, before securing seed money from angel investors Christoph Janz and Alexander Bruehl, and Index Ventures and 500 Startups. A second round was completed in September.

“We’re solving a problem that’s out there faced by a lot of companies. I’d love to see hundreds of thousands of businesses using Geckoboard. I don’t see any reason why they couldn’t,” says Joyce, who sees Geckoboard as a communications company rather than an analytics group. While the group has started doing some marketing, focus is still on product development. While the temptation could be to overload the dashboard with information and features such as chat, simplicity is key to the Geckoboard experience: “You can crowd this thing really quickly […] and you could end up with something that’s hard to interpret. That would defeat the whole point of what we’re trying to do. Our job is to strip away the noise and present the core data that you can action.”

Now, and next
Getting data in real time, and for this to be relevant and manageable, is becoming increasingly vital as Big Data continues to boom. A number of companies are working on ways to tap into this need, the best known probably being New York-based Chartbeat. Founded in 2009, Chartbeat announced a Series B round of $9.5m in April to further develop its web analytics software, which aims to give publishers and websites such as the New York Times and Starbucks more accurate insights into how visitors are engaging with the content. Lebanese Woopra, founded in 2008, provides a similar service, having recently launched version 5.0 of its service and opened a San Francisco office. GoodData raised $25m earlier this year, taking total funding to $53.5m from investors including Andreessen Horowitz. The San Francisco company targets Saas providers, which integrate GoodData’s technology into its own platforms and then offer it to their customers as a tool for understanding and monetising their data.

MindMeld is an intriguing new application from Expert Labs, the US non-profit technology incubator. Star Trek fans will appreciate the nod to Spock’s information-sharing trick, but MindMeld is actually what is known as an “anticipatory computing engine”. Expected to launch by the end of the year, this Siri-on-steroids will initially be presented as a video conferencing tool, running in the background to pick up cues from the conversation in an attempt to give users the information they need before they have to ask. MindMeld then creates a display of relevant information and ranks it according to importance, drawing information from search engines, news articles, videos, social networks and documents stored locally. “[It] can actually understand what you say and find relevant information so that you have it at your fingertips,” Expect Labs co-founder Timothy Tuttle told AFP. This means that if someone in the conversation mentions a restaurant, MindMeld will pull up maps, reviews and menus from the place. “This stuff seems like science fiction, but it can happen fairly well today, and five to ten years from now it will be standard in just about every phone call or real-time communication application.”