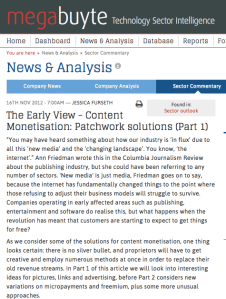 The Early View
Content Monetisation: Patchwork solutions (Part 1)
“You may have heard something about how our industry is ‘in flux’ due to all this ‘new media’ and the ‘changing landscape’. You know, ‘the internet’.” Ann Friedman wrote this in the Columbia Journalism Review about the publishing industry, but she could have been referring to any number of sectors. “New media” is just media, Friedman goes on to say, because the internet has fundamentally changed things to the point where those refusing to adjust their business models will struggle to survive. Companies operating in early-affected areas such as publishing, entertainment and software do realise this, but what happens when the revolution has meant customers are starting to expect getting things for free?

As we consider some of the solutions for content monetisation, one thing looks certain: there is no silver bullet, and proprietors will have to get creative and employ numerous methods at once in order to replace their old revenue streams. In Part 1 of this article we will look into interesting ideas for pictures, links and advertising, before Part 2 will consider new variations on micropayments and freemium, plus some more unusual approaches.

Taggstar: Money from pictures
Two-year old London startup Taggstar has developed a technology that lets publishers monetise their online images. Already used by The Daily Telegraph, MSN, magazines from Hearst and The Independent, Taggstar works by adding little hotspots, or tags, to images, which open up additional content when tapped.

“Taggstar quickly and easily lets publishers turn images into a shopping experience,” says CEO and founder Fraser Robinson, as we ‘met’ via Skype. Publishers are given the technology free of charge, and can fill the tags with any content they want, be it videos, text, links, or most likely, things to buy. For example, a picture of Kate Moss can have a tag for each of her items of clothing, which then bring up similar items available from shops. This is where the monetisation comes in: “We have our own image search engine that crawls through merchant feeds and pulls in similar looking products. If anyone clicks through to a shop to buy, or even just to look, Taggstar gets paid, and that revenue is shared with the publisher.”

Taggstar is working on a soon-to-be-launched second revenue stream where display advertising will be enabled either inside or outside the border of images, says Robinson. Taggstar’s media sales team will connect sites with advertisers, again sharing the revenues with publishers. A third function of the technology, a bit further away, is a browser plug-in that lets anyone tag any online content: “Our core business model is to provide technology for publishers, so this bit is just nice to have. But it will let people tag content and share it in places such as Pinterest or Facebook,” says Robinson, describing it as an “everything everywhere tagging tool”. Intriguingly, this could potentially become something of a personal surface layer of content on the web amongst people who have the plug-in, letting them share tag clusters with each other, similar to how Spotify lets people share music playlists.

While newspapers have been “very excited” about Taggstar, Robinson says any size site can use the technology, down to personal blogs: “We encourage anyone to use it.” Taggstar already works on tablet computers, with a mobile version due for launch next year. Currently six-people strong, Taggstar won’t divulge financial details but Robinson says the company sees “tens of millions of image impressions every month”; this means the number of times an image loads from a tag. A key metric is the engagement rate: how often people will actually interact with a tag. This currently averages at 10%, which Robinson describes as decent for an online environment, but increasing tag interaction is a source of constant tinkering for the team.

Taggstar has raised £1.5m in funds from investors including ex-M&S Stuart Rose, Bertelsmann CEO Thomas Middelhoff, Sportal and Marquis Jets-founder Rob Hersov, and Ariadne Capital. Currently operating mainly in the UK and US, the company is planning a European roll-out, but Robinson, who was formerly managing director of commercial and media at lastminute.com, has big ambitions for the company: “I would like our technology to be part of the everyday furniture on the websites. I would like Taggstar to be as omnipresent on a page as the buttons for Reddit, Digg, Pinterest and Facebook; all the network sites that join together the internet.”

Linking together the web
While Taggstar is focusing its efforts on solving a problem for publishers, others are also operating in the field of image-interaction technology, such as ThingLink and Luminate. San Francisco-based Stipple provides a service where product-creators or shops can tag their own images to ensure product information is not lost as the pictures travel around the web. This means that even if someone saves the image on their desktop and re-uses it elsewhere, new viewers can still find their way to the original source, and potentially make a purchase. “Images are the web’s largest channel in terms of audience, but no one has had the ability to actually remain connected to and in control of their images on the open web,” Stipple CEO and co-founder Rey Flemings told AdAge. After initially raising $2m from among others Kleiner Perkins Caufield & Byers and Justin Timberlake, the group secured another $5m in May in a round led by Floodgate and Relevance Capital.

VigLink, the affiliate-links specialist provider we interviewed in San Francisco back in May, last month announced a partnership with Seattle’s GeoRiot, which deals in optimisation of links on iTunes and the App Store. This means VigLink’s users can now get better paid for linking to products on iTunes, plus referred visitors get routed to the correct country automatically. UK-based competitor Skimlinks, which also offers geotargeting, generated headlines earlier this year when customer Pinterest was criticised for using its services without declaring this to site users. Illustrating how web-based companies need to be open about how they monetise content, Pinterest abandoned their relationship with Skimlinks, and have yet to declare a revenue strategy despite being valued at $1.5bn following May’s $100m fundraising round. One possible spoke to the monetisation wheel could be a feature available from Amazon’s Zappos Labs; PinPointing recommends products on the site based on the photos pinned on Pinterest boards. The two companies are friendly but do not have a formal relationship, but the route does look ripe for monetisation of some sort: the amount of referrals generated from Pinterest has now overtaken that of Twitter. “Social shopping is a total buzzword that people throw around, but I don’t think any big brands have cracked it,” Will Young, a Zappos director, told Bloomberg. “When we talk to people and ask what they think is the best social-shopping experience, they say Pinterest, and it’s not even a retailer.”

A service perspective
While not as profitable as it once was, and increasingly threatened by the use of mobile internet devices that cut out ads, online advertising still remains a vital component of content monetisation. Google AdSense remains the leader of the pack when it comes to content-sensitive web marketing, with alternatives including AdBrite, Chitika, Infolinks and Bidvertiser, to name only a few. Also here, technology is becoming more clever, as demonstrated when a recent personal browsing history including flights to Moscow and sheets from John Lewis quickly became reflected in ads on sites such as The Guardian and Facebook.

Targeted advertising makes sense from a business perspective, and it seems people don’t even mind it: a 24-country survey by Ipsos found that 58% of social media users are in favour of targeted ads, as opposed to 42% being against. While seeing deals flash up offering flights to Russia on unrelated sites felt quite Big Brother-ish the first time it happened, this too may be one thing we can get used to if it feels like it provides a valuable service. While it’s a bit more complicated for the content provider, the new methods of monetisation may actually add some value for the customer. If we can get a hand finding the dress Kate Moss was wearing, get a link to an obscure book, or save money on a flight, we’ll soon get onboard if it makes life a little easier.