Published in Ballad Of … magazine, 2011 (Ballad of Lola-Bacon). Original article. 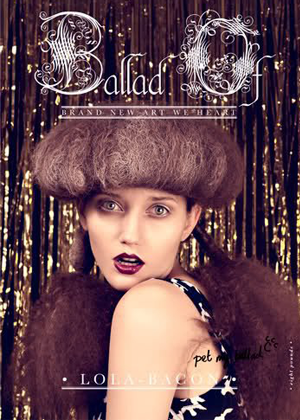 When you get to heaven you can taste the Milky Way

A pet could be the perfect alibi to make sure I don’t come across like a nutter when I talk to myself. These are the kinds of thoughts that cross my mind when I feel the draft from the unused cat flap in my front door. Although having a heartbeat at the receiving end of my mumblings could well backfire, turning me into the ‘crazy cat lady’. It’s a concern, but my ankles tickle at the thought of a furry body squeezing by. And there are those words again: I think I want a cat. It’s an instinctual thing, this furball craving, but when I think about it properly I know I’m probably unfit for pet parenthood. Not only am I absent-minded and hardly ever at home, but in terms of pet care I come from dodgy stock. I’m warning you now: this next bit is bad.

A long time ago my parents and I had a cat. I was too young to remember but the pictures show a sturdy, black and white thing called Mons. The poor moggy was left to fend for himself for most of the day while my parents worked, and so he would go roaming around the village. The farmers would find the neglected pet hiding out in their barns, and call my dad to come pick him up. But it gets worse. One day, tired of driving around after the cat, my dad okayed one of the farmers’ suggestions for a more permanent solution: death by shotgun. Mons, just wanting some company, never saw it coming. And yes, it gets worse. According to family legend, Mons was shot on three different occasions. My dad, an educated man of good standing in the community, green-lighted cat-murder on three separate occasions; after all, it’s hard to identify a cat over the phone. One of them was probably the long-suffering Mons, but I expect all three will be lined up as obstacles when we get to heaven.

You may be relieved to hear my family gave up on keeping free-roaming animals after this dark time. A few years of budgies followed – a more manageable pet with the caging and all. It was a success for a while, as the first bird, a blue one called Polly, was lovely. He would sit on your finger and eat food from your mouth if you let it (which I did, because I was seven). If you spoke to him he’d speak back, a long ream of gargled noises interspersed with mentions of his own name. Best bird ever, that Polly. Then we went away one weekend and my dad left the fireplace chimney vent open, and Polly suffered death by freezing.

Once my parents were reasonably confident their seven-year-old had recovered from the image of Marigold-clad hands carrying the stiff budgie out to the bins (any day now), a replacement was procured. Enter Viggo, identical to Polly on the outside, like night and day on the inside. Viggo was skittish – he didn’t want to sit on your finger, he only ate brand-name birdseed, and he certainly didn’t speak. I tried to engage with Viggo, but to no avail. I’d feed and water him at reasonable intervals over the next few years, but Viggo was mostly left to his own devices. Eventually he died too, presumably of natural causes, or possibly of exposure to a hostile environment.

The bird era is at least 15 years ago now and no more pets have been killed, but then again there haven’t been any to keep alive. My dad, chief villain in the story, is now a dog-owner – a bold venture if you ask me, but he assures me it’s insured (presumably for death by drowning, as they live by the sea). And as the dog turns five, I’m thinking maybe a cat would be fine living with me after all. Because I’m finding myself going more and more gooey-eyed over the little creatures, with their little furry faces, whiskers, soft coats and springy tails. And the paws! The paws are possibly the best part. Enviable sense of independence and adventure too, plus a whole nine lives to give us the best odds possible.

I realise the way I feel about cats is the way girls my age are supposed to feel about babies, but it seems I’ve got my biological wires crossed. Because it’s only when I see something with four legs and a tail that I understand what my friends mean when they coo over little humans. You know, I’m thinking maybe one cat isn’t quite enough; I ought to have two. Florence and Felicity, they’d be called, Flo and Flik. We’d talk all the time, and you could call me crazy but I really wouldn’t care.

The British one 🔹🔷
New in “Jess thinks about life in the city”: On urban noise and who gets to enjoy quiet, in @curbed, one of my very favourite publications. (Google curbed + sound + cities and it pops right up)✨
Full blown mad city crush, reloaded ✨
I’m home and the city is full of my favourite people and places and all the things that feel like me and I’m in love with it all over 🤍
At San Francisco Airport, about to hit that ten hour overnight flight with a large red wine, a pop of diphenhydramine, and these noise-cancelling headphones which have become an extension of my body. Going places is wonderful but there’s no place like home 🇺🇸✈️🇬🇧
The last time in was in San Francisco was the month David Bowie died, and he was playing everywhere. “I never thought I’d need so many people,” one of his songs go, and I remember thinking that it was amazing that I had got so far and only just realised this, that you actually do need to have some people. Well that was four years ago, and now I’m right here again thinking the same exact thing all over. All of this has happened before, and all of this will happen again 💙🌁
So I did the hiking and the mountaintop, the bouldering, the dancing, lots of walking and a bunch of yoga, here in my life as California Jess. I’m not nearly as fit as that makes me sound out to be, but I can say with confidence this may be the most in shape I’ve ever been (except for the year I biked ten miles a day, never forget). 🍎 This photo was just before yoga last night, knowing I could do 90 minutes of vinyasa without collapsing just fine, and I was actually excited about it. I feel happy to be here (at this level of fitness), but mostly it’s about feeling at home in my body again, which has taken such a long time to come back to me - I wasn’t sure it ever would 🍎
I wanted a blue sky and this city has delivered, spectacularly ☀️🌁
Top of Mount Tamalpais, looking over San Francisco - hands down the best view I have seen in my life 💙🌁
Rif / Jess / California ☀️☀️☀️