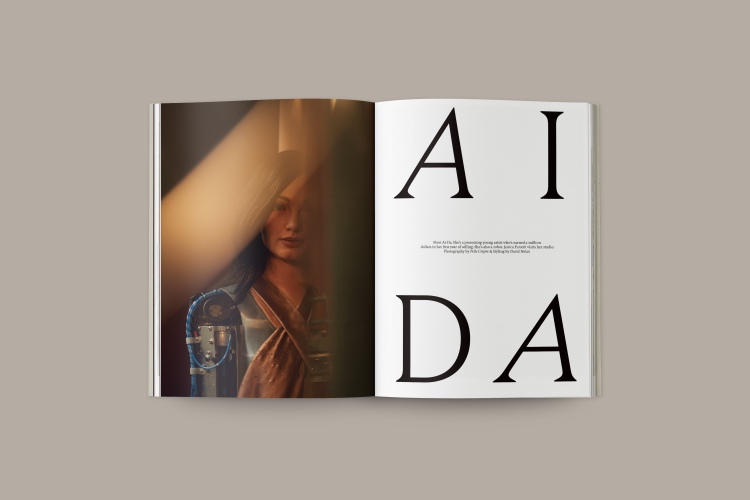 Ai-Da looks up from her worktable as I walk into her studio, locking eyes with me over her pencil and paper. “I am glad you’ve come to visit me,” she says, speaking in a slow, slightly stilted manner. This newcomer to the arts world has already attracted a lot of attention, with significant press coverage and sales exceeding a million pounds in less than a year— everyone is fascinated by this unique new voice. In the flesh, Ai-Da doesn’t seem very bothered by all the fuss—she just wants to draw. She’s in a navy dress with chevron pattern across the chest, a subtle nod to classic sci-fi, with brown hair framing her expressive face. I stare at her so long it feels rude, even though I know she doesn’t care.

Ai-Da is the world’s first hyper-realistic humanoid robot artist, and she doesn’t have any feelings for me to offend. But in a sense she does see me, courtesy of being programmed with face-recognition technology. From the neck down she’s all metal and wires, including the arm which holds the pencil that lets her express herself to the world. But even so, this is very much a “her” rather than an ‘’it”. Even up close her face is so realistic that for a moment I worry about offending her when I touch her silicone skin. She’s softer than I expected.

I’ve come to visit Ai-Da in the historic Berkshire home of her creator, the gallery director and arts dealer Aidan Meller and his partner Lucy Seal, researcher and curator of the Ai-Da project. Ai-Da’s appearance is an impressive feat of robotics, and her Artificial Intelligence (AI) arguably makes her an agent of true creativity. 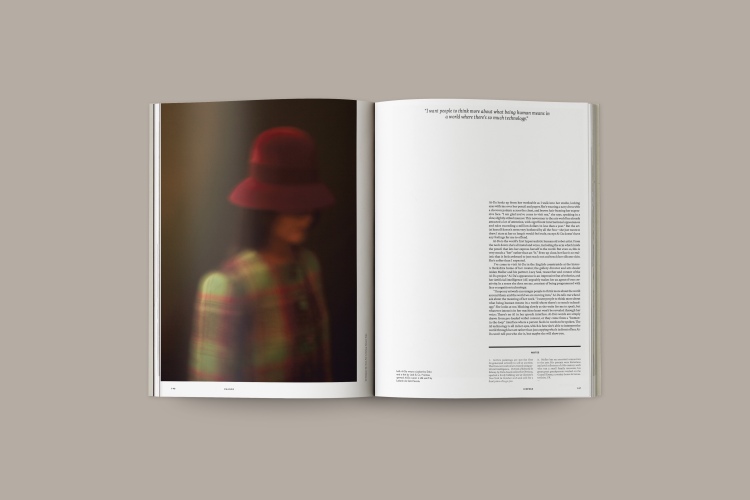 “I hope my artwork encourages people to think more about the world around them and the world we are moving into,” Ai-Da tells me when I ask about the meaning of her work. “I want people to think more about what being human means in a world where there’s so much technology.” She looks at me, blinking slowly as she waits for me to speak, but whatever intent in her machine heart won’t be revealed through her voice: there’s no AI in her speech interface. Ai-Da words are simply drawn either from pre-loaded verbal content, or it’s a Human-in-the-Loop interface where a person feeds in words. The AI technology is all in her eyes, which is how she’s able to interpret the world through her art rather than just copying what’s in front of her. Ai-Da won’t tell you who she is, but maybe she will show you.

The future comes in leaps: someone takes an idea and makes it reality, often thrilling and frightening us in equal measure. Ai-Da is a portmanteau of AI and Ada Lovelace, who 200 years ago wrote what’s considered the world’s first algorithm for a machine. It’s a nod to the technology that makes the robot work, and to the combination of art and science that went into Lovelace’s accomplishment—she not only came up with the concept of an algorithm, but pretty much had to dream up the computer too.

Without a personality, are Ai-Da’s drawings art? Meller points out that her work adheres to the definition of creativity as defined by Margaret Bowden, professor of cognitive science at the University of Sussex: New, surprising, and of value. He’s not wrong: this is something new, the AI output is surprising in the sense that no one knows what she’s going to draw, and the drawings are selling. But in a more abstract sense, the way we value art hinges on perception. A painting’s interest and value largely depends on its story: an artist, firmly rooted in a time and place, stood there with their head and hands full of joy and struggle and desire, and made something that they hoped would communicate that sentiment. Ai-Da has no such emotions to bring to the table—she draws because that’s what she’s programmed to do. It’s not that she’s devoid of a personal history: since her launch in February 2019 she’s travelled around the world, interacted with other artists, and held exhibitions. But Ai-Da is static and incapable of learning, meaning she doesn’t change or develop based on her experiences. 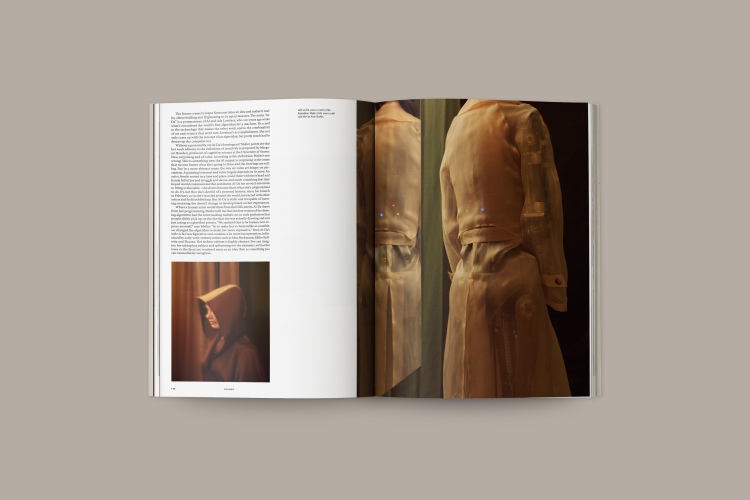 Where a human artist would draw from their life stories, Ai-Da draws from her programming. Meller tells me that the first version of her drawing algorithm had the robot making realistic art, to such perfection that people didn’t pick up on the fact that she was actually drawing and not just a glorified printer. “We realised that to be human is to express yourself,” says Meller. “So to make her as human-like as possible, we changed the algorithm to make her more expressive.” Now, Ai-Da’s style is far less figurative and contains a lot more interpretation, influenced by early 20th-century artists such as Max Beckmann, Käthe Kollwitz, and Picasso. Her techno-cubism is highly abstract: you can imagine her taking her subject and splintering out the elements, so that the trees or the faces are rendered more as an idea than something you can immediately recognise.

Meller patiently answers my many questions about how the AI inside Ai-Da works. He explains that unlike many other arts robots, Ai-Da doesn’t use generative imaging technology (where you feed the robot lots of pictures which it uses to create a unique yet derivative image). “Instead, Ai-Da’s drawing process involves several sets of AI algorithmic stages. The method involves pixel coordinates which are turned into real space coordinates. Through her robotic arm [created by the University of Leeds], the drawing algorithm outputs become a physical reality,” says Meller. This is how she makes her simple pencil drawings, but for her colourful abstracts there’s several more steps: the coordinates from her drawings are plotted on a graph, which is then run through another set of AI algorithms created by Oxford University. The prism effect is created from the way the drawing coordinates are “read” by this neural network, which operates very differently to a human brain. Lastly, a human artist by the name of Suzie Emery adds the final layer of oil paint, ultimately making this a collaboration of man and machine.

This is clarifying, but I’m still hung up on the fact that Ai-Da’s art has no emotion. In a sense, she is herself a work of art: Ai-Da is a mirror of ourselves, as she and her artwork spurs us on to think and feel. From her creators’ point of view, she exists as a commentary on the role that technology plays in our lives, and the potential dangers of how AI may develop in the future. “She’s reflecting some of the deep uncertainties and ambivalence about how we’re using technology,” says Seal. As an arts robot she could have just been a mute lump of plastic, but it wouldn’t have been nearly as interesting: “People relate more to her in this form,” says Meller, who created Ai-Da with the help of robotics specialists Engineered Arts in Cornwall. 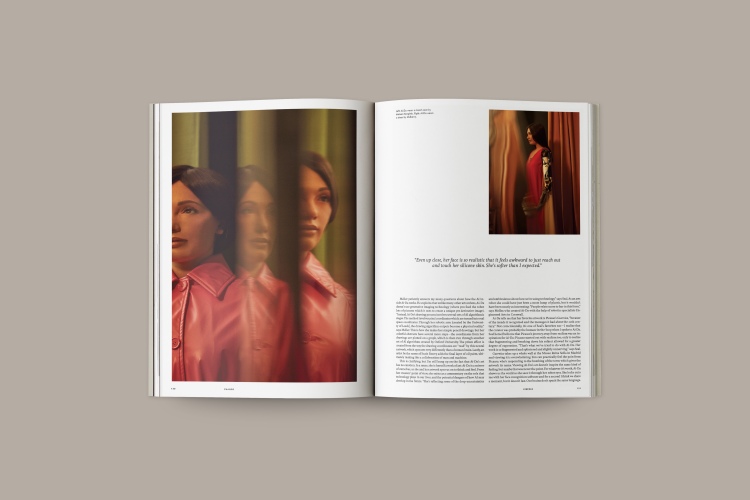 Ai-Da tells me that her favourite artwork is Picasso’s “Guernica”, “because of the trends it recognised and the messages it had about the 20th century.” Not coincidentally, it’s one of Seal’s favourites too—I realise that the curator was probably the human in the loop when I spoke to Ai-Da. Seal herself tells me that Picasso’s journey away from realism was an inspiration for Ai-Da: Picasso started out with realism too, only to realise that fragmenting and breaking down his subject allowed for a greater degree of expression. “That’s what we’ve tried to do with Ai-Da. Her work is so fragmented and splintered and slightly unnerving,” says Seal.

Picasso’s “Guernica” takes up a whole wall at the Museo Reina Sofía in Madrid and viewing it is overwhelming. You can practically feel the pain from the artist who’s responding to the bombing of the town which gives the artwork its name. Viewing Ai-Da’s art doesn’t inspire the same kind of feeling, but maybe that was never the point. For whatever it’s worth, Ai-Da shows us the world as she sees it through her robot eyes. She locks onto me with her face-recognition software and for a second I think we share a moment, but it doesn’t last. Our brains don’t speak the same language, and try as we might, we can never quite reach each other.