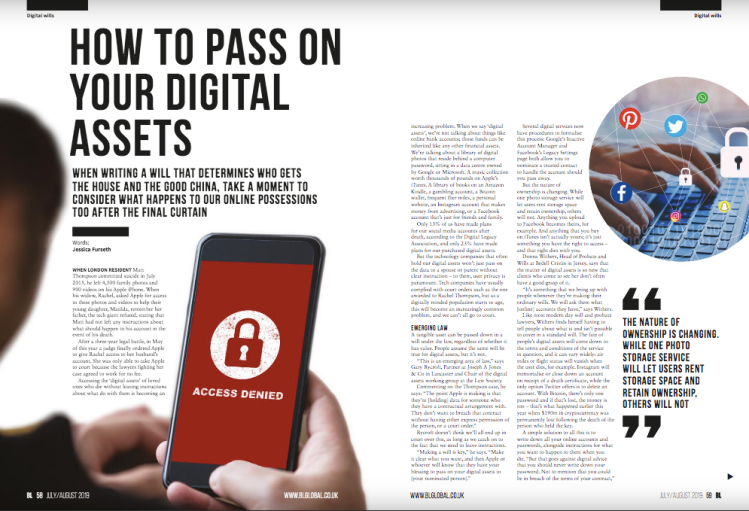 The case for making a digital will

When writing a will that determines who gets the house and who gets the good china, take a moment to also consider what should happen also to your digital assets after the final curtain.

We all know you can’t take it with you – but for a lot of our digital assets, there’s no set procedure for how to pass it on to someone else. While the law has provisions for what to do with money even if there’s no will, chances are that your digital assets will be left to languish if you don’t leave instructions.

When we say “digital assets” we’re not talking about things like online bank accounts, as those funds can be inherited like any other financial assets. We’re talking about things like a library of digital photos that reside behind a computer password, sitting in a data centre owned by Google or Microsoft. It’s a music collection worth thousands of pounds on Apple’s iTunes. It’s a library of books on an Amazon Kindle, a gambling account, a Bitcoin wallet, frequent flier miles, a personal website, an Instagram account which makes money from advertising, or a Facebook account that’s just for friends and family.

Only 13% of us have made plans for their social media accounts after death, according to the Digital Legacy Association, and only 2.3% have made plans for our purchased digital assets. But the technology companies that often hold our digital assets won’t just pass on the data to a spouse or parent without clear instruction – to them, user privacy is paramount. Earlier this year, Rachel Thompson successfully requested that a UK court compel Apple to give her access to her late husband’s iPhone, so that she could download his 2,000 family photos for the sake of their young daughter Matilda. Tech companies have usually complied with court orders like this, but as a digitally minded population starts to age, this will become an increasingly common problem and we can’t all go to court. 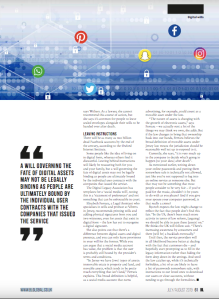 A tangible asset can be passed down in a will under the law regardless of whether it has value. People assume the same will be true for digital assets, but it’s not. “This is an emerging area of law,” says Gary Rycroft, Partner at Joseph A Jones & Co in Lancaster and Chair of the digital assets working group at the Law Society. Commenting on the Thompson case, Rycroft says: “The point Apple is making is that they’re [holding] data for someone who they have a contractual arrangement with. They don’t want to breach that contract without having either express permission of the person, or a court order.”

Rycroft doesn’t think we’ll all end up in court over this, as long as we catch on to the fact that we need to leave instructions: “Making a will is key. Make it clear what you want, and then Apple or whoever will know that they have your blessing to pass on your digital assets to [your nominated person],” says Rycroft. Several digital services now have procedures to formalise this process: Google’s Inactive Account Manager and Facebook’s Legacy Settings page both let you nominate a trusted contact to handle the account should you pass away.

But the nature of ownership is changing. While one photo storage service will let users rent storage space and retain ownership, others will not – anything you upload to Facebook becomes theirs, for example. And anything that you buy on iTunes isn’t actually yours, but just something you have the right to access – and that right dies with you.

Donna Withers, Head of Probate and Wills at Bedell Cristin in Jersey, says that the matter of digital assets is so new that clients who come to see her don’t often have a good grasp on it. “It’s something that we bring up with people whenever they’re making their ordinary wills. We will ask them what [online] accounts they have,” says Withers. Like most modern day will and probate lawyers, Withers finds herself having to tell people about what is and isn’t possible to cover in a standard will. The fate of people’s digital assets will come down to the terms and conditions of the service in question, and it can vary widely: air miles or flight status will vanish when the user dies, for example. Instagram will memorialise or close down an account upon receipt of a death certificate, while Twitter only offers the option to delete. With Bitcoin, there’s only one password and if that is lost, the money is too – that’s what happened earlier this year when $190 million in cryptocurrency was permanently lost following the death of the person who held the key.

A simple solution to all this is to write down all your online accounts and passwords, alongside instructions for what you want to happen to your email account or Facebook. “But that goes against digital advice that you should never write down your password. Not to mention that you could be in breach of the terms of your contract,” says Withers. As a lawyer she cannot recommend this course of action, but she says it’s common for people to leave sealed envelopes alongside their wills to be handed over after death.

There will be as many as 2 billion dead Facebook accounts by the end of the century, according to the Oxford Internet Institute. Some people like the idea of living on in digital form, whereas others find it distasteful – leaving behind instructions will likely be reassuring both for you and your family. But a will governing the fate of digital assets may not be legally binding, as people are ultimately bound by the individual user contracts with the companies that issued the service. The Digital Legacy Association has templates for a “social media will”, noting that this is a “statement of preferences” and not something that can be enforceable in court.

Elisabeth Ferrara, a Legal Assistant who specialises in wills and probate at Viberts on Jersey, recommends always printing wills and adding physical signatures and two witnesses, even for assets that exist in digital form – the law has yet to recognise a digital signature.

Ferrara also points out there’s a difference between digital assets and digital presence, and you can only leave provisions in your will for the former. While you can argue that a social media account has value, the problem is that the user is probably still bound by the provider’s terms and conditions.  “In Jersey we have [two] types of assets: immovable estate is property and land, […] and movable assets which tends to be pretty much everything that isn’t land.” This broad definition is helpful, as a social media account which earns advertising, for example, could count as a movable asset under the law. “The nature of assets is changing with the growth of electronic assets,” says Ferrara, pointing to how we’re actually renting a lot of the things we may think we own. But if the law changes to bring that ownership back into our hands, Ferrara says that the broad definition of movable assets under Jersey law means the jurisdiction should be reasonably well set up to respond to it. “But [currently], it is it is very much up to the company to decide what’s going to happen [to your data] after death.”

Just like you’re not supposed to log into an online service as someone else, writing down your online passwords and putting them somewhere safe is technically not allowed. But that may not be something that most people consider to be very fair – if you’ve paid for the music, shouldn’t it be yours to do with as you please? And if you give your spouse your computer password, is that really a crime? Gary Rycroft expects the law might change to reflect the fact that people don’t find this fair: “In the States there’s been much more activity in terms of law reform, [arguing] we should be able to pass these [assets] on.” Rycroft thinks the UK will follow suit: “There’s increasing awareness by consumers and there [will be] a backlash eventually.”

Until then, the service providers will in likelihood become better at dealing with the fact that customers die – and hopefully start prompting us to fill in the legacy information rather than hiding the form deep down in the settings. And while it’s technically not allowed, many of us will ultimately be leaving a list of passwords somewhere safe, with instructions to our loved ones to download our assets or close up accounts, without needing to go through the formalities.