Everything and its opposite

There’s so much want in Kathryn Joseph’s music. It’s right there in the title of her new album, “From when I wake the want is” – that feeling that sits there, under the eyes, under the tongue, and there’s nothing you can do except watch as the ache turns into a pleasure. At least that’s how sensations float together in Joseph’s music: “I think you need that sore part to make anything that’s beautiful.”

This is a heartbreak album, but unless I knew that Joseph wrote it in response to lost love I don’t think I would have been able to tell. Joseph leaves such a wide open space in her soundscapes that it could be about anything, as long as you’re willing to meet here there. The title reminds me of that quote by Poe: “Sometimes, I’m terrified of my heart, of its constant hunger for whatever it is it wants; the way it stops and starts.” I’m fascinated by the idea that there’s you and then there’s your heart, or your want – and that your want isn’t necessarily looking out for your best interests.

Joseph’s music seems to come from a place outside of her control: “Songs start off as noises, then I fit the words into it. I don’t really understand it.” The music swells behind the sparse yet sharp lyrics, delivered in Joseph’s sometimes brittle, sometimes cottony, voice. But there’s no self-pity there, as she sings it almost matter-of-factly: “How do I get rid of all this fucking love?” The song soars, creating a sense of floating as the soreness transcends into something almost comforting. You know when you’re experiencing something so intense that it flips over into its opposite? Like when you eat something so extremely sweet that it starts to taste acidic?

I’d been thinking about this for a while, long before I heard Joseph’s song – “From when I wake the want is” was released in August 2018. When I call Joseph at home in Glasgow, a few days after she opened for Neko Case in London, I don’t expect her to necessarily understand what I’m on about, but of course she does: “I am obsessed with the feeling that I am everything and its opposite at all times. It’s what I find almost disturbing about myself. I think my songs are that too.” 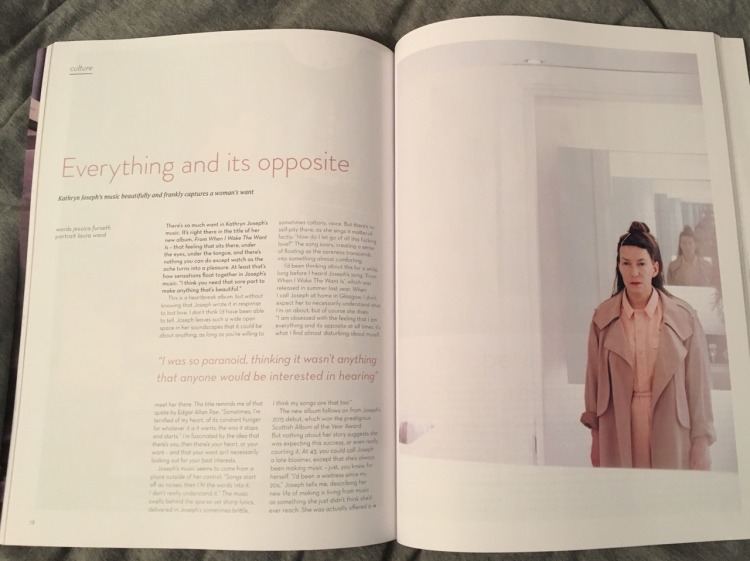 The new album follows on from Joseph’s 2015 debut, which won the prestigious Scottish SAY Award. But nothing about her story suggests she was expecting this success, or even really courting it. At 43, you could call Joseph a late bloomer, except that she’s always been making music – just, you know, for herself. “I’d been a waitress since my twenties,” Joseph tells me, describing her new life of making a living from music as something she just didn’t think she’d ever reach. She hated doing the things you need to do in order to get your music out, as it made her feel out of control. And her life before was good: “I loved my job, and I loved that it gave me a safe routine that was good for me. Then I could write however I was feeling it, and it didn’t matter how often I was doing it.” So going pro, if you will, was not ever something she actually planned to do, but then she moved to Glasgow and her neighbour happened to be Marcus Mackay, now her producer. Still, everything about Joseph’s journey has been a hide and seek experience – she recorded the first album without any expectations, and had it not been for the initiative of Claire Mackay, who runs the Hits the Fan label with Marcus, it never would have seen the light of day: “I was so paranoid about it, thinking it wasn’t anything that anyone would be interested in hearing,” she says. “I would never have done anything with it.”

I pause for a moment. I can see the appeal of keeping the thing you’re passionate about “untainted” by keeping it separate from any money-making ventures. But still, most people would be tempted to at least try? Joseph thinks about it. She loved her previous job and the people she was working with – she really liked her life, you know? She tries to explain: “I’ve lived in really beautiful places in Scotland … it made sense to me. It made me feel…” She stops, starts again. “I went to university when I was much younger, and my sister got really ill so I didn’t last long. I remember feeling, ‘I need to feel okay every day.’” This shift in thinking made it hard for Joseph to do things she didn’t like in the hopes of future rewards: “I still don’t feel like I’ve got that ability. Everything I feel is very immediate, and what I react to is very immediate. I’m not into long-term planning.”

Releasing the albums has been a far better experience than she expected, though. “The world has turned out to be a lot nicer than I thought it was going to be!” She laughs. “I love that this is my job now. I love getting to do it.” And it came at the right moment too – Joseph was actually offered a record deal when she was in her 20s, but felt very much out of her depth at the time: “I’m just so glad I waited until I was absolutely sure how the songs should sound and be.” 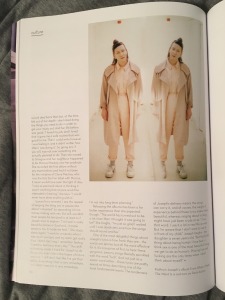 One of the most delightful things about Joseph’s lyrics is how frank they are – the words are sparse, but all the more effective for it. It’s a surprise at first, to hear these gorgeous, swoony songs liberally sprinkled with the word “fuck”. And not just as a swear word either – these lyrics are pretty sexual at times, describing one of the most fundamental wants. The tenderness of Joseph’s delivery means the songs can carry it, and of course, the weight of age and experience behind these lyrics makes them beautiful, whereas singing about fucking might have just been crude at 22. “I love that word. I use it a lot in real life as well. But I’m aware that I don’t want to use it in front of my child.” Joseph laughs – her daughter is seven years old. “But that’s the thing about being human I love best – I think sex is one of the most beautiful things we get to do as humans. Playing live and fucking are the only times when I don’t think about myself.”

Kathryn Joseph’s album “From when I wake the want is” is out now on Rock Action.