On the health impact of business trips, and how employers need to take more responsibility

To have the life of a business hotshot, putting in a couple of hours for meetings before lounging at the pool for the rest of the day – nice work if you can get it, right? But of course you can’t, because this version of business travel doesn’t exist anymore, if it ever actually did. Any lingering luxuries afforded to work travel disappeared with the 2008 credit crunch, and economy flights and tight turnarounds have been the norm ever since. “The guys here take the mickey out of me when I’m going to Dubai, asking if I’m going to the swim-up bar,” says Trevor Norman, Director of Funds and Islamic Finance at VG in Jersey. “But it’s not all fun – business trips are work.”

Seven million business trips are taken every year by UK residents, according to the Office of National Statistics, a number that’s typically risen by 2.8% per year since 1980. A survey by Bristol Airport found that those who travel with their jobs typically head out eight times a year. But frequent business travel can have serious negative effects on health – mental as well as physical. Because there’s a lot going on when you’re travelling for work: you have to get to the airport on time and pass through security, and maybe the plane is late. Trying to sleep in an economy seat is never fun, and you land late at night and maybe there’s only junk food available. You have a few drinks – it’s been a long day – and you skip the gym before crashing into bed for some restless sleep while fighting your body clock. Tomorrow is a day of back-to-back meetings.

There’s a proven link between a high number of days spent on the road and a risk of long-term health issues like heart attacks and strokes. But a study published last December in the Journal of Occupational and Environmental Medicine suggests it may be causing some more immediate problems too. People who travel a lot for work are more likely to see their mental health suffering, by having trouble sleeping, being sedentary, smoking, and drinking more alcohol. Anxiety and depression also spiked for those who found themselves frequently on the road.

While most of us probably travel less than 14 times per month – the frequency which the study identified as being particularly harmful – the negative effects can be felt at more moderate levels too. A World Bank study found that the business travellers among its staff were three times as likely to file psychological insurance claims. Health risk appraisal surveys at large corporations routinely show that international business travel is associated not just with poor health, but that it also makes it harder to keep up with the pace of work. This means it’s not just an individual’s problem, but a corporate concern.

“The opportunity to travel is often touted by companies as a benefit in their recruitment of talent, but the accumulating evidence linking extensive business travel to chronic disease health risks needs to be factored into the cost-benefit analysis of the practice,” Dr Andrew Rundle, lead study author and Associate Professor of Epidemiology at Columbia University in New York, wrote in the Harvard Business Review. “Employees simply need to be aware that business travel can predispose them to making poorer health decisions.”

Dr Bob Gallagher, who heads up occupational health at Queens Road Medical Practice in Guernsey, says that companies are getting better at taking responsibility for their employees’ well-being while on the road. The issue should be considered as part of a company’s risk assessment: “Work travel can cause problems that can make people unwell, or it can make pre-existing mental or physical health conditions worse – or both, as these things are often linked,” says Gallagher. At his practice, Gallagher meets people who travel “an awful lot”, sometimes for weeks at a time. “It’s rare to meet someone who travels often for work who says it’s something they enjoy doing,” says Gallagher – for most people it’s something they have to do for the job and it can be a source of stress.

Common ill effects of work travel include heartburn, acid indigestion, digestion problems, and trouble sleeping, says Gallagher. “If you are below par because you haven’t slept, you’re a bit hungover, you’ve eaten too much food, you haven’t exercised, are you performing at your best? Probably not.” While some of this is down to the individual, companies are starting to realise that it’s their responsibility too. “Organisations need to look at this. They shouldn’t cram the day full of meetings so people can’t have some rest. Make sure people have a bit more time,” says Gallagher.

Ensuring employees don’t return from a mad-dash business trip too tired to drive home from the airport is also a matter for companies’ duty of care, says Andrew Perolls, Director of Business Travel Direct, a travel management company. “Companies have to be more careful about how they look after staff.” This also means ensuring staff aren’t staying in hotels in unsafe parts of town, considering things like access to medical facilities, and also, ensuring the company knows exactly where everyone is in case of a natural or political event.

While Perolls can testify to the fact that the life of the work traveller has sped up – going on a one-day business trip to the US is not unheard of – he also thinks this might be improving. “What people are prepared to put up with is changing,” says Perolls, adding that staff are increasingly bristling at being told to fly budget airlines at the crack of dawn. Especially the millennial generation, who’re now in their 30s, are more attuned to work-life balance: “We know that in specialist professions, they may even look at the travel policy before deciding to join a company if the job involves a lot of travel.”

Letting employees choose where to stay (within a budget) is one way to keep people happy – that way they can pick a hotel with a gym, or something in walking distance of good food options. Allowing people to fly out the night before will also prevent stress, as well as ensuring there’s downtime between meetings. Giving people a leisure day or two at the end of their trip is a good way to ensure the trip is a positive event, says Perolls: “It’s a shame going all the way to Bangkok only to see the airport.”

Ensuring you don’t have to run through airport security is always a great start to any trip, but ultimately, travel is an exercise in unpredictability. “Stress can be defined as a perceived lack of control, which is common when travelling,” says David Brudö, co-founder and CEO of Remente, a mental health app that aims to promote wellbeing through planning. Brudö explains how he recently used Remente to plan a trip to Japan, from booking flights and choosing restaurants to scheduling in his meditation sessions on the plane. “When you’re travelling you’re a bit disconnected from the outside world, but this means you actually have some time to take care of yourself. A plane is a great place to just sit and meditate, read a book, and invest in yourself,” says Brudö. Remente also works with businesses looking to improve employee wellbeing: “We see that the more balanced people are, the more productive they are. That’s something businesses are increasingly realising.”

It’s hard to get around the need for business travel – video conferencing is constantly improving, but it’s not a substitute for a handshake. But a stressed organisation is not a smart organisation, and it’s clear that companies are realising that taking care of people is ultimately a sound business decision; Deloitte found that 88% of UK businesses are working towards improving work-life balance for staff. That also means helping people stay healthy on the road, by booking the hotel with the nice gym, or providing resources for meditation or cognitive behavioural therapy. Ultimately, it also means picking the people who enjoy travel to go on trips, while letting those who’d rather not stay home.

Trevor Norman took 90 flights last year, having gone on 18 business trips from his home in Jersey. “I’m constantly travelling,” says Norman, Director of Funds and Islamic Finance at VG, a Jersey-based independent provider of fiduciary and administrative solutions. “My father was BA staff so my mother flew with me even while pregnant. I’ve flown all my life, literally!” He laughs. “I was lucky enough to fly to all sorts of places before people were really travelling. That’s carried on in my business career.”

Norman’s BA record shows he’s flown almost 600,000 miles. He’s got the routine down pat: “In our spare room I have travel drawers with all the bits I need. I have a bag of electrical leads that I just drop in my case. It’s almost instinctive by now.” As he usually flies to the UK first, Normal likes to get that leg done the day before, as he’s done with risking still sitting in traffic on the M25 as his plane boards. “Also, I always allow time between meetings, for something to eat and a comfort break. … I try and relax as much as I can no the plane, have a snooze and try and arrive fresh. I can sleep just about anywhere and don’t tend to suffer much with jetlag – I’m lucky that way.”

Missing home used to be more of a problem when the children were young. “That was stressful for my wife,” says Norman. Although now that the kids have left home, his wife often comes with him on trips, which makes for a lovely time for them both. “I enjoy the travel to see different places and learn about different cultures. I try and see the positive side of it.” 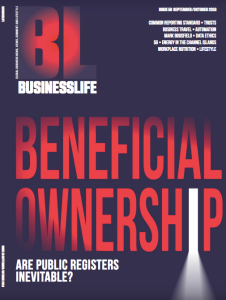