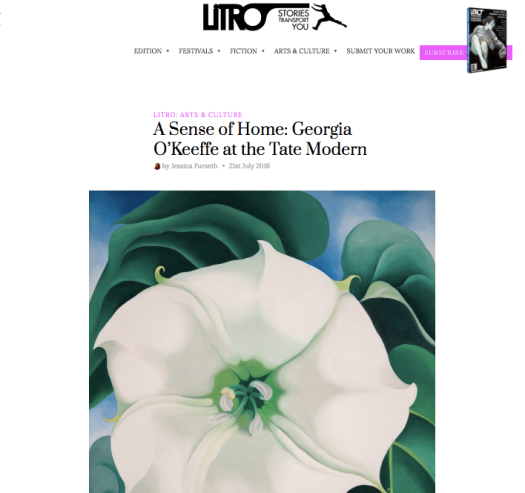 The Georgia O’Keeffe retrospective is at the Tate Modern, London, until 30th October 2016.

“I have things in my head that are not like what anyone has taught me,” Georgia O’Keeffe once said. Right now, the Tate Modern’s retrospective of the pioneering modernist may well present you with art unlike what anyone has shown you. Because after spending an afternoon in O’Keeffe’s company at the Tate, I can’t help but think that for a reasonably well-known name, O’Keeffe is vastly underrated. She’s been unfairly pigeon-holed as that desert lady with the flowers, but her work is so much broader than that. You may expect this show to be great – but it is in fact wonderful. Like O’Keeffe said after seeing New Mexico for the first time: “Well! Well! Well! … This is wonderful. No one told me it was like this!”

Those famous flowers kick things off – there’s one in the Tate’s poster and that’s what will get you through the door. And by all means: the flowers have earned their fame because they’re stunning, no doubt about it – they’re so much more beautiful on canvas than they appear in reproductions. The colour play is exquisite and the curves are masterful – everything O’Keeffe does has these incredible subtle colours and curves – and it’s delicious. Sweetly pink, white and turquoise in ‘Music – Pink and Blue No 1’. More white and mint green in ‘Abstraction White Rose’. But in ‘Grey Lines with Black Blue and Yellow’ it’s not subtle anymore: the soft pink is contrasted with bold yellow, blue, pink.

This is also where it gets a little tricky, as O’Keeffe steadfastly maintained throughout her life that if we’re seeing anything sexual in her flower paintings, that’s on us, not her: “When people read erotic symbols into my paintings, they’re really talking about their own affairs.” Fair enough. But once it’s been suggested that those petals could also be vaginas, it’s very difficult to stop seeing it. Did she deny this interpretation because of the times? ‘Grey Lines with Black Blue and Yellow’ was painted in 1923. But part of the Tate’s intention with this exhibition is to “dispel the clichés that persist” around O’Keeffe’s work, so we should probably give her the benefit of the doubt. If the artist claims a flower is just a flower, who am I to say otherwise?

The flowers are very beautiful though, regardless of interpretation. They feel overwhelming, maybe because they’re so big and up close.There’s something unapologetic about them, but at the same time, they’re simply pretty. Maybe that’s why they feel so radical: the notion that you can take something so delicate and lovely, something as passive as a flower, and make it look so powerful. If passivity – let’s go ahead and call it femininity – is considered a lesser state now, it certainly was a hundred years ago, around the time these paintings were created. But it was lazy to read O’Keeffe’s art based on her gender back then, and it’s even lazier now. O’Keeffe put it this way: “I’ll paint what I see – what the flower is to me. … You hung all your own associations with flowers on my flower, and you write about my flower as if I think and see what you think and see of the flower – and I don’t.” O’Keeffe creates a world inside each flower, and invite us to get lost in there – but she never quite tells us what the flower means to her. We may be having our own experiences with her work, but she’s completely in control.

This feeling continues into the next section of the Tate show, which has photographs of O’Keeffe by her husband, Arthur Stieglitz. There’s O’Keeffe’s face, her torso, her breasts, hands, arms. There’s O’Keeffe staring into the camera, the photo cropped defiantly low across her naked chest. But in the photos, O’Keeffe doesn’t look defiant at all – she just comes across as someone who knows exactly what she wants. Looking at ‘White Iris”, the flower is so soft in white, pink and just a little green; if we see something in there – passivity, defiance, whatever – that’s on us. O’Keeffe simply meets your eye and makes you really, really look.

O’Keeffe moves on from flowers after she came to New Mexico – they’re rare in the desert – but she still examines the details of her surrounding with the same close, loving gaze. Her knack for curves is applied to the mountains and the mesas, except now the colours are saturated: the red clay and the blue stone, and then, the adobe buildings in soft brown, pale grey. Just like with the petals, O’Keeffe creates layers, and the same happens with the skeletons. O’Keeffe paints the bones so lovingly against the pale blue sky or the pink sands that they appear far more romantic than any of those flowers ever did. It takes a moment to realise just how artfully she’s recreated the shades of white of the bone – her technical mastery has become secondary to the sheer interestingness of her work.

O’Keeffe’s paintings of the desert landscape around Ghost Ranch, her first New Mexico home, are less flashy than the flowers and the skulls, but every bit as remarkable. Those curves are now perfected: the sides of the mesas, the rise of the mountains, the cutaway rock-sides. The shades of pink in ‘Red and Yellow Cliffs’ – dusty rose, pale salmon, buttery peach, gold, muddy greens – you could drown in those colours. O’Keeffe discovered a sense of home when she came to New Mexico: ‘As soon as I saw it, that was my country. I’d never seen anything like it before, but it fitted to me exactly. It’s something that’s in the air – it’s different.’ She loved New Mexico, and the feeling pours off the paintings.

This is where O’Keeffe really dives into exploring layers. In the Black Place and the White Place series she paints the exact same things over and over, varying the colours or the style. That’s what it’s like to look at something over and over: there’s always something else there, because you’re a little different every time. The experience of standing still is very much an exercise in change. The paintings of the door of O’Keeffe’s Abiquiú home are the highlight of this joy of repetition – she’s really making us look closely now, just like the flowers, except now she’s giving us even less to work with: just a plain brown wall and a black door, barely any sky at all.

But this time she provides a hint about the world she’s hidden inside all those layers. ‘My Last Door’ is a black square on white, that’s pretty much it, but it took her two years to complete. She loved that house – you can feel her reaching for that feeling, striving to articulate it on canvas in its glorious, plain, untamable state. All the way through O’Keeffe’s work there’s a sense of her chasing down experience, hidden in the curves of the petals and the bones and the mountains – there are worlds to be discovered everywhere, if only you look close enough. But never is it clearer than with O’Keeffe’s repetition of that plain door, over and over: home is a feeling, and love is a place.