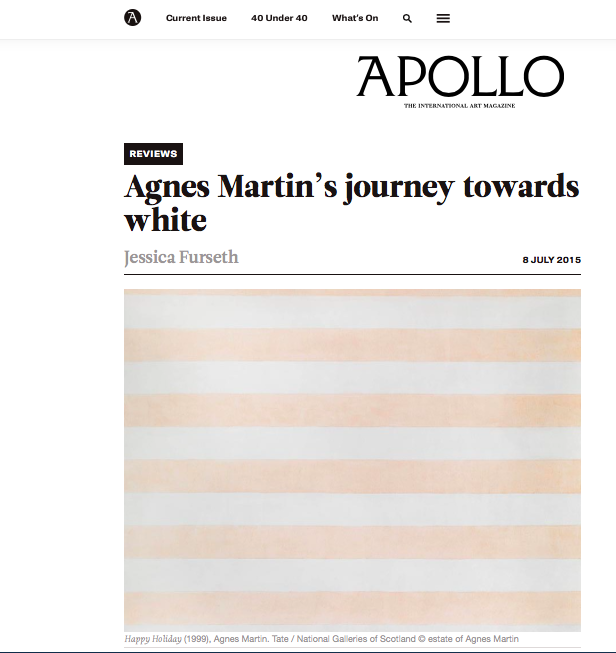 Agnes Martin and the singular obsession

What is Agnes Martin trying to say? If you really want to know you will have to go see for yourself, because rarely does art lose quite so much in a photograph. Even once you are there, it takes a moment to work out what is going on: the Tate Modern retrospective of the American artist demands a certain commitment. Because as Agnes Martin once said: “Beauty is the mystery of life. It is not just in the eye. It is in the mind.”

At first glance the surfaces are plain – beige, grey, muddy yellow – but take a moment to slow your breath and much will be revealed. Do not expect the titles to be much help though: “I love the whole world” is one, another is “Happy holiday”, and so it goes, as if she is mocking our instinct to look for clues. Agnes Martin is not a thought – she is a feeling. This is the softest geometry, and the mellowest company you will keep today.

The exhibition runs chronologically, from Martin’s initial shapes in muted colours to the signature grids, which she started in the 1960s and stuck to for the rest of her life. For a body of work that is so meditative, Martin’s art also has a distinctly obsessive streak: she used a ruler to create her lines and blocks, always trying to get it straighter, more exact. Many of the grid paintings have tiny repetitive patterns – it is as if you can feel her there, straining so hard to get it just the way she wants it.

Martin’s extreme desire for order on the canvas can possibly be traced back to her schizophrenia, which she suffered from throughout her adult life. Sometimes this contrast can be felt on the canvas: the picture is a wish, the painful flipside or reality. But other times the same process creates a result that is nothing short of magical; “Friendship” is a large-scale canvas covered in gold foil, laid out in bright and deliciously dirty rectangles. It is still subtle, like everything Martin does, but the effect is a shiver down the back. “A grey stone” is another wonderful experience: the closely detailed grey surface transforms gentleness into thrill.

More blocks of would-be dull colours follow in the next room, but by this point we are primed to love it: pale grey, pale beige, off-white; small rectangles, dots, tiny squares. Then a whole section of graphite grey, in what starts to feel like obsession – what is happening here? The answer comes in the next room, where obsession turns into worship with the series called “The Islands”. Now the canvases are all in white, over and over, surrounding you, and the effect is nothing short of elating. The paintings glow from the slightly darkened walls, and it feels like the problem Martin has been working so hard to solve has reached some sort of resolution. The answer, it feels like she is saying, is in the light.

Martin’s journey towards a single colour brings to mind another Tate Modern retrospective: Mark Rothko in 2008-09. But while Martin’s journey of simplification culminates in bright white, Rothko ventured in the opposite direction: he moved through colour towards a room of canvases in intense black. What both conclusions have in common is a feeling of reaching answers to inner turmoil; “We favor the simple expression of the complex thought. We are for the large shape because it has the impact of the unequivocal,” Rothko wrote in his New York Times manifesto, co-signed by Adolph Gottlieb. “We wish to reassert the picture plane. We are for flat forms because they destroy illusion and reveal truth.”

Rothko’s journey ended differently than Martin’s: he committed suicide at 66, while Martin kept painting into old age, passing of natural causes at 92. For both artists, their Tate Modern retrospectives present one more room after their singular colour experiences, and in both cases the final insight feels revealing. For Rothko, it was the reintroduction of light: subtle panes of silvery grey started creeping into his black canvases, insisting that maybe there is more than one answer. For Martin, it is the breaking with her strict geometry: bold blocks of purple, defiant lines of red, cheeky tips of acidic yellow. It is still precise and exact, but it feels less obsessed and more playful. It feels like the work of someone with nothing to prove and nothing to lose – it feels like a wink, is what it does.