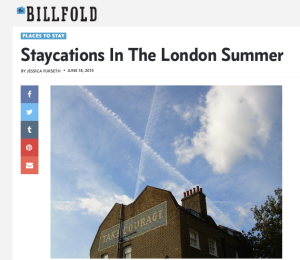 Staycations in the London summer
I woke up by myself today in my little flat in Hackney. My husband is away for work, so I slept past 10 o’clock which I never do unless I’m alone. As much as I like company, I’m very good at being by myself, especially in London. Last weekend I meant to go to a neighbourhood book festival but ended up roaming around all day until it was dark, even though this is June, the lightest month.

Something like that might have happened again today, but my best friend K text me, wanting to meet for coffee. I said yes despite having to rush, because there’s never too much time to spend with K. I took the Overground to Whitechapel, which all of a sudden has plenty of good coffee, the calling card of an “up and coming” neighbourhood. K and I talked for an hour and I decide to walk home, taking the meandering route through the backstreets.

London is full of concrete, but I’ve never seen a major city that’s this green. There are trees and flowers everywhere, drooping over the brick walls and onto the pavements. This city is a very pretty boy right now. It’s been muggy lately but it’s warm, and before long you’re sweating under grey cloud. London is tough in the winter, but for six months over the summer, there’s nothing you can do to get me to leave the city. Right now, London is better than anything I can imagine.

I first read this a few years ago and I keep coming back to it. Familiarity isn’t enough to love a place, as I was familiar with the village I grew up in but it never felt anything like this. I’ve lived in London for 12 years now – it wasn’t love at first sight because this city is hard on newcomers, but if you stick it out, this place will reward you. I always say it takes two years to get on good terms with London, and it took me even longer to love it, maybe six years. That’s nothing like my experience of ever falling in love with a person, but make no mistake: London is it for me.

Most of the time it’s nice but nothing unusual, and then suddenly it’ll come over me: I’ll be walking along and I’ll look up and I realise that damn, I love this city. If I’m on a bus crossing the Thames, it’s bound to happen. Often though, it happens during the moments when London’s not so shiny, when I’m distracted or thrown off course. London has a knack for keeping you in that in-between space: a little hot, a little cold, leaving you guessing what’s coming.

Like the other night when I was out with my friend G. We just wanted to leave the house for beers, but suddenly we were wrists deep in barbecue sauce because that’s what Hackney is like now: cocktails and ribs. It was too cool to be wearing shorts down by the canal but we walked along anyway, shivering in the early London summer. Because isn’t this the best part? It’s so light, so much summer still to come.

I have a list in my head of things I want to do this summer, during the annual London staycation when I won’t leave the city. I want to go see Agnes Martin at the Tate Modern, and the summer exhibition at the Royal Academy of Art. I want go out to the Thames Barrier Park – this is the city’s flood barrier and a work of art. I haven’t been there in years as it’s a bit out of the way, but I want to go with my husband and a bottle of prosecco. I want to try this cocktail bar in Soho with my new friend R, and talk about work the whole time because sometimes that’s the best.

I saw a picture on Instagram from the Nunhead Reservoir recently, which apparently has amazing views of the city, a rare find in a shallow dish like London. I’ve never been to Nunhead. A few years ago, I went cycling up past the Hackney Marshes with the then-boyfriend who got me to finally buy a bicycle, and I’ve been wanting to go again ever since. There’s a grotty pub up the River Lea where you can get lunch, and even though the food won’t be great it won’t matter.

Sometimes though, the best way to go see the sights is having guests from out of town. When my mother visited recently we went to the London Transport Museum, which is brilliant: it chronicles the history of the Tube so it’s part trainset playground, but it’s also partially an archive of functional graphic design. Away from the rush hour, the Underground is a treat to explore, even after all these years – each line a different pattern of colours, each station a different style. I passed through Baker Street station the other day, on the platform that was part of the very first Tube line. The light wells are still streaming daylight down onto the platform.

I got out at Paddington, just onto the canal, which in West London is the same water that runs past my house in East London. It’s funny – I always tell people the key to London is to find your neighbourhood, that’s how the city will start making sense to you. I once spent three months not leaving Hackney, which would be easy to do again – like when I get Vietnamese on Kingsland Road with my friend C and we order the same things every time. There’s so much more to London than the patch where I live, but there’s a reason why I live here.

Last weekend I met up with K again, we walked along the canal up past London Fields, taking the long back around to my house. It’s quiet on the roads around here, away from the main stretch where the buses run. Heavy with green and flowers, and all the beautiful yellow-brick victorian terrace houses we can’t afford to live in. Then we came across this odd building made from corrugated iron plates, sticking out like a sore thumb in the row of pretty houses. It’s the Sight of Eternal Life church, said the internet, thought to be the oldest surviving “Tin Tabernacle” in the world. I took a photo and we walked on, but that’s the best part, I think: finding a piece of curiosity in a place I’ve lived for years, but somehow it’s something I’ve never noticed.

I took my mother on a long walk along the canal too when she was here, spending a whole day away from the London she knows from the pictures. Down past the canal locks and up through the market, into the park and down through the quiet back roads – I’ve walked this route so many times, and looked up to think, so many times, how much I love this city. Almost everything big that’s ever happened to me has happened in London. I know I keep saying things are the best, but there’s always something else about London that’s the best. Now how’s that for a love affair.