Published in This Is Tomorrow, 2011. Original article here. 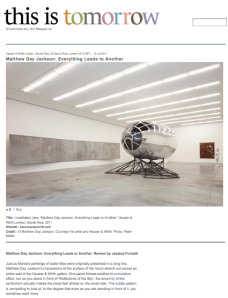 Matthew Day Jackson: Everything leads to another
Hauser & Wirth, London

Just as Monet’s paintings of waterlilies were originally presented in a long line, Matthew Day Jackson’s impressions of the surface of the moon stretch out across an entire wall of the Hauser & Wirth gallery. One panel follows another to cumulative effect, but as you stand in front of ‘Reflections of the Sky’, the enormity of the symbolism actually makes the piece feel almost on the small side. The subtle pattern is compelling to look at, to the degree that even as you are standing in front of it, you somehow want more.

Matthew Day Jackson has a knack for drawing in his audience. With ‘Everything Leads to Another’, the artist is interested in beauty that carries a counterpart, ‘so closely that it is difficult to delineate one from the other’. Works by the Brooklyn artist fill both galleries at the Savile Row space, with the North gallery dominated by large-scale pieces such as the moonscape and ‘Axis Mundi’, a manipulation of the cockpit of a B29 aircraft bomber. Positioned next to the moonscape, the polished cockpit segment evokes thoughts of space travel, an impression strengthened by an interior filled with strange, neon-coloured anthropological artefacts, as a nod to the undiscovered.

If the North gallery looks for the big picture through humanity’s push outwards, the South gallery takes the opposite approach and searches for answers by looking inward. With the notion of mortality running as a central theme, the artist has used his own body to examine what it is we are made from. Especially here is it tempting to touch Jackson’s sculptures, which are rich in texture and you suspect you may be missing out on a layer of the experience by being restrained to simply looking.

The central figure is a life-sized body, carved like a topographical map. The main body is made from a concoction of materials, including wood, wax and plastic, with carefully crafted internal organs sitting heavy in the middle. Four images surround the central figure, each presenting the body in different manners. The body made from meat set in jelly is the most uncomfortable to look at, to the extent that the depiction of the burning corpse is a relief. There is a discomfort that comes with being confronted with the messiness and the vulnerability of the body mechanism, but in Jackson’s world also this is a counterpart indistinguishable from the related beauty.

The exhibition concludes with a video piece, presented in a retro-style living room set. A documentary-style film, ‘In Search of … Ghosts’, plays surrounded by artwork, including Jackson’s ‘Life’ magazine covers with patches of embroidery. From the sofa in the artist’s fake living room, you are surrounded by references to space exploration and theories about the unknown; ‘who are we, and where do we come from,’ asks the video narrator, ‘what lies waiting in our future?’ But as the video continues to ponder the paranormal, it seems that whether we look into space or within our own bodies, the answers may well be the same. As Jackson points out, everything leads to another, and we can see our own reflection on every surface.

New in “Jess thinks about life in the city”: On urban noise and who gets to enjoy quiet, in @curbed, one of my very favourite publications. (Google curbed + sound + cities and it pops right up)✨
Full blown mad city crush, reloaded ✨
I’m home and the city is full of my favourite people and places and all the things that feel like me and I’m in love with it all over 🤍
At San Francisco Airport, about to hit that ten hour overnight flight with a large red wine, a pop of diphenhydramine, and these noise-cancelling headphones which have become an extension of my body. Going places is wonderful but there’s no place like home 🇺🇸✈️🇬🇧
The last time in was in San Francisco was the month David Bowie died, and he was playing everywhere. “I never thought I’d need so many people,” one of his songs go, and I remember thinking that it was amazing that I had got so far and only just realised this, that you actually do need to have some people. Well that was four years ago, and now I’m right here again thinking the same exact thing all over. All of this has happened before, and all of this will happen again 💙🌁
So I did the hiking and the mountaintop, the bouldering, the dancing, lots of walking and a bunch of yoga, here in my life as California Jess. I’m not nearly as fit as that makes me sound out to be, but I can say with confidence this may be the most in shape I’ve ever been (except for the year I biked ten miles a day, never forget). 🍎 This photo was just before yoga last night, knowing I could do 90 minutes of vinyasa without collapsing just fine, and I was actually excited about it. I feel happy to be here, but mostly it’s about feeling at home in my body again, which has taken such a long time to come back to me - I wasn’t sure it ever would 🍎
I wanted a blue sky and this city has delivered, spectacularly ☀️🌁
Top of Mount Tamalpais, looking over San Francisco - hands down the best view I have seen in my life 💙🌁
Rif / Jess / California ☀️☀️☀️
The big sunshine, the endless blue sky, the hazy air, and in the distance, the city 🌁