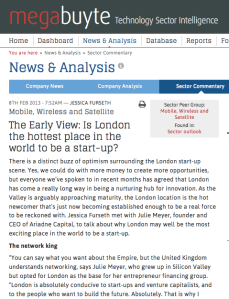 The Early View
Is London the hottest place in the world to be a start-up?
There is a distinct buzz of optimism surrounding the London start-up scene. Yes, we could do with more money to create more opportunities, but everyone we’ve spoken to agree that London has come a really long way in being a nurturing hub for innovation. As the Valley is arguably approaching maturation, the London location is the hot newcomer that’s just now becoming established enough to be a real force to be reckoned with. We met with Julie Meyer, founder and CEO of Ariadne Capital, to talk about why London may well be the most exciting place in the world to be a start-up.

The network king
“You can say what you want about the Empire, but the United Kingdom understands networking, says Julie Meyer, who grew up in Silicon Valley but opted for London as the base for her entrepreneur financing group. “London is absolutely conducive to start-ups and venture capitalists, and to the people who want to build the future. Absolutely. That is why I choose to be here. This is London! As far as I am concerned, this is the center of the universe.” Meyer laughs, but she’s also being serious. We’re chatting across the conference table in her offices near Trafalgar Square, from which Meyer runs the Ariadne Capital Entrepreneurs Fund. BeatThatQuote, Espotting, Monitise, SpinVox and Zopa are among the finds of the woman who founded the First Tuesday entrepreneur network and sold it, in 2000, for $50m.

While home to plenty of companies with international success, the UK technology industry tends to quietly get on with it while leaving it to its US cousins to brag about changing the world. But Meyer believes there are distinct advantages to the British way of doing things: “I have seen it be a tremendous advantage, for instance in terms of culture and team. It’s less about the one superstar player and more about the team going over the wall together. […] Another advantage is the network: I think the United Kingdom should focus on trading through the Anglosphere network, which it created. The Eurozone is just one of the spheres of influence for the UK, the others being the Commonwealth and North America. What other country has three spheres of influence like the United Kingdom?”

The British way
“What I like about British entrepreneurs is they are more about the talent, less the ego,” says Meyer, who doesn’t thinks the British are becoming more ‘American’ in their approach to business. “The British way has its disadvantages, but let’s face it: it’s a lot less off-putting! When people go around talking about themselves it gets rather annoying, doesn’t it? But that’s the way the Americans are raised.” On the subject of companies succeeding internationally with a British approach, Meyer is a big fan of Monitise, the mobile banking group which has been advised by Ariadne Capital since 2004. “[CEO and co-founder] Alistair Lukies is an amazing entrepreneur. He has just acquired his biggest American rival [Clairmail], and this is the way we should be doing it. Why just sell to them, why not buy them?”

UK software groups have the potential be as big as US ones, is Meyer’s message, which is a refreshing point of view so shortly after UK software leader Autonomy went American, to HP. However, last year’s in-depth industry study from Startup Genome found that Silicon Valley has 30% more founders that want to change the world than London or New York, while London has twice as many founders wanting to make a quick sale compared to the other two. Having said that, our interviews with London startups found that most founders wanted to build instead of sell, seeing no reason why they couldn’t carve out a niche in the new internet-augmented world alongside their Valley peers.

“I want to build the company and be in charge of what we’re doing. The idea of selling to a big company or work for Google doesn’t really do it for me,” said James Gill, CEO and co-founder of London start-up GoSquared, when we met in the autumn. “I love the idea of us being a big UK tech company, and I’m seeing more and more London companies having that attitude. […] We has more than ever going for us; sure, we don’t quite have the capital going into London companies, but it’s never been a better time for us to start aiming to build a company that could one day go public.”

The David and Goliath dance
While the young entrepreneurs may be less interested in working for Google, the trend suggests they are likely to find themselves in some sort of collaboration with the mature players. Today’s startups, the so-called Davids, should no longer hope to slay the Goliaths of their industries, says Meyer, but instead the pair must dance: “Today’s entrepreneurs know venture capitalists will not give them $50m to go build a Tesco,” she says, after pointing out how Ocado made life a lot harder than it needed be, by opting to create its own distribution network instead of hooking into an existing one. “You can tell Ocado is of a previous era because the venture capitalists gave them a lot of money to build distribution. Today what you would do is say, ‘Hey Julie, I have an insight into consumer behavior online. Can I have £250,000 to demonstrate this?’ Then we could do a deal with a Goliath with a distribution base, and build the company having raised maybe around £2m.”

This collaborative approach is not just for the benefit of the startups, but also for the established players grappling to stay innovative. The solution for the incumbents isn’t necessarily to buy younger companies, says Meyer, who runs workshops putting old and new companies together in an informal setting where a fresh conversation and experimentation can take place. “Where we see the opportunity is around business model, not tech. We are not investing in disruptive technologies, we are investing in disruptive economics,” says Meyer, pointing to Monitise as a good example of a David and Goliath collaboration: the group reached out to big banks offering them a cut of mobile commerce revenues instead of struggling to create a system from scratch. “A lot of corporates will say, ‘show us some disruptive technology’. But it shouldn’t be too disruptive, it should be pretty basic.”