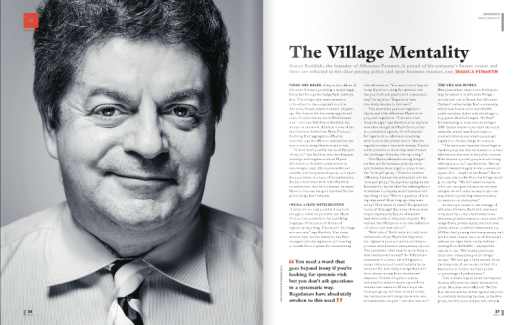 The choreographer
Interview with Simon Ruddick, co-founder and Managing Director of Albourne Partners
There are bales of hay inside the offices of Albourne Partners, providing a surprisingly folksy feel for a global hedge fund advisory firm. The village environment is a heritage from the company’s roots in Albourne, Sussex, where it all started 20 years ago. But in spite of the decorative apples and cows it’s clear we are in Westminster now, and Simon Ruddick has his eye on the world. In the most literal sense, this is: Ruddick is one of the key architects behind the Opera initiative, a global effort to standardise how hedge funds monitor risk.

“I think that’s possibly the most fun part of my job,” says Ruddick, who has frequent meetings with regulators about the Open Protocol Enabling Risk Aggregation, Opera for short. The co-founder and Managing Director comes across as surprisingly casual despite his striped tie and grey trousers, of the kind that seem likely to have a matching jacket left on the back of a chair somewhere. He is personable and cheerful, as his speech turns into a rapid fire when on the topic of his enthusiasms. Because that’s what work is for Ruddick: an enthusiasm. And why yes, he certainly wants Opera to become the golden standard for the global hedge fund industry.

Opera: A date with destiny
“I think it’s not only possible, I am bold enough to think it’s probable: the Open Protocol has a potential to be a unifying language of risk across all forms of regulatory reporting. That would be a huge win-win-win,” says Ruddick. The three winners here are the investors, the fund managers and the regulators – all standing to benefit from a system for streamlining risk information: “You need a word beyond irony if you’re looking for systemic risk, but you don’t ask questions in a systematic way. Regulators have absolutely awoken to this need.”

APRA, the Australian pensions regulator, explicitly references Opera in its proposed regulation. “That was a real breakthrough for us,” says Ruddick, explaining how even though the Open Protocol has no commercial agenda, it’s still unusual for regulators to reference something with roots in the private sector. “But the regulators have a date with destiny. They’re under huge pressure to show they have cracked the challenge of market risk reporting.”

The Opera refuseniks are few and far between among hedge fund managers, with the main split occurring between those eager to adopt Opera, and what Ruddick calls the ‘slow yes’ group. “There’s a marked difference between the enthusiasts and the ‘slow yes’ group,” says Ruddick, who was fascinated to try and find the defining factor whether a company would embrace risk reporting or not. “Was it a question of how big they were? How long ago they were set up? How much in assets? Geographical location? Strategy? But none of those were simple explanatory factors of whether they were early or reluctant adopters. We realised the bifurcation is its own definition: old school and new school.”

New school funds were not only more enthusiastic about Opera, Ruddick found, but they were also lighter in protocol and more likely to produce administrator transparency reports. The punchline: “And they’re more likely to have institutional money!” So if Ruddick’s assessment is correct, the willingness to accept risk protocols could actually be an indicator for how likely a hedge fund will be to attract money from institutional investors. “I think it’s quite a schism, and what’s at stake is secure capital from institutional investors. … What I hope the ‘slow yes’ group will bear in mind is that the institutions will always know who was an enthusiastic adopter, and who was not.”

In the Village: A life of constancy
One place where these sorts of whispers may be shared is the Albourne Village; not the real one in Sussex, but Albourne Partners’ online hedge fund community which now boasts over 80,000 active residents. Asked why the Village is so popular, Ruddick laughs: “It’s free!” It’s interesting to note how the Village’s 2001 launch means it pre-dates the social networks, which have certainly found ways to commercialise spaces where people get together to discuss the things they have in common.

“The reason we launched the Village in first place was that we wanted to collect information that was in the public domain. If we became a portal, people would bring information to us, says Ruddick. “But we haven’t invested hugely in the commercial aspect of it … maybe in the future.” But in that case, any profits from the Village would go to charity: “We will never monetise it for our own gain, because we are very straight: we will make money in just one way, which is providing research advice to investors on alternatives.”

As the topic moves to the strategy of Albourne Partners, Ruddick’s chattiness is replaced by a clear, determined voice. Virtual village pubs aside, Albourne provides advice to over 270 hedge funds, private equity and real asset clients, whose combined investments top $350 billion. And proving that transparency isn’t just for for their clients, the cost of Albourne’s service is actually right there on the website, displayed for anyone to see. “We’re very passionate about this: transparency in all things. We also get a little excited about the simplicity of our model in that it’s a fixed price in dollars, not basis points or percentage of performance.” This is where it goes above and beyond, because Albourne has actually never increased its prices. Not even by inflation? “No! In fact, the amount we deliver against the price is constantly increasing, because as the firm grows we hire more analysts who write more research, and the clients get the benefit from our increased scale.”

His colleagues tease him about this, says Ruddick, but he can’t help it: “I’m a huge fan of what we call constancy as opposed to consistency. Consistency is when two things are different but you try to make them similar. Constancy is when you actually try and keep things the same.” The pricing is one example of this, and a low churn of people is another: “We hope this is a comfort to clients and prospects, that they know us as people and they know our price. The best of all is worlds is when they like our service and want to make it part of their long term plans.”

Make Money Not War
As Albourne Partners celebrates its 20th year, Ruddick has maintained the village roots as an inspiration for more than just the decoration: “We’re a bit of hippie commune!” He says this jokingly after telling me about Hedge Stock, a company event a few years back where The Who provided the entertainment. The motto was ‘Make Money Not War’. On a more serious note, Ruddick nods to the company’s “village creed” not just in terms of the transparent pricing, but also the clear rules on how profit is distributed: 50% goes to base cost, 25% to bonuses, 25% to the firm.

The company also equity available to partners every year, and makes a point of avoiding outside stakeholders or debt. Holding around 40%, Ruddick remains the largest shareholder: “I feel intensely wedded to what I describe as the fierce independence of Albourne. I’d much rather my equity pass on to my colleagues; I absolutely prefer to earn less and keep the company fully independent, because I think that in the long term, and in the super-long term, that’s the better business proposition.” The rapid fire speech has gone completely now, as Ruddick stresses that there will be no outside partners: “We feel comfortable, possibly to the point of smugness, with our independence.”

Ruddick’s love for his company is clear to see. He explains at length and in detail how he has gone to great trouble to establish Albourne as a well-oiled machine, one that’s a good place to work while also providing great service to clients. But then there’s that self-confessed “obsession” with industry initiatives again: “I can’t describe completely why it matters so much to me, I just know it does!” He laughs. “I’d love to feel I can do something useful, but when you’ve done Politics, Philosophy and Economics you can’t save a life. Any good I can do can only be indirectly, so if I can make the industry a better place, that’s my personal motivation.”

Does that mean he may one day go and join the regulatory machine? Ruddick answers carefully: “I feel hugely confident that if I step away from Albourne, I know Albourne won’t miss a beat. That’s by design.” But is that the plan? “I’d be really surprised if any regulator wanted someone as opinionated as me!” He laughs. And then: “We’re lucky to have a business model that brings us to contact with a wide range of investors and funds. … There’s a lot of things we can’t do, but the things we can do is try and nudge along various industry initiatives.”

He pauses. “I’m never quite sure, and my wife says the same, whether I work for Albourne or I support Albourne the same way you support a soccer team. … Even if I was less active day to day, I couldn’t detach myself from that emotional investment.” The way he says this makes me think he’s not trying to avoid the question – maybe he genuinely doesn’t know if he can bear to leave Albourne. “I absolutely love it here. I can’t think why would I ever retire when I am having this much fun.”

Not that Ruddick (53) doesn’t have a life outside of work, far from it. Ballroom latin dancing is where it’s at, as Ruddick and his wife both dance socially and take weekly lessons. And sometimes they will put on headphones and dance in railway stations and shopping centres, to the dread of their three children. “We’re mad keen on dancing. And some of the most fun in life is embarrassing your children!” Ruddick laughs. He tells the story of how his wife always loved dancing and he was terrified of it, but ended up learning for her sake and now he may be the one who’s more hooked. Ballroom is the main addiction but the couple also dabbles in salsa, tango and cha-cha, and recently there’s even been a few lessons in Angolan Kizomba. “Later in life you lose your fear of looking ridiculous. Now I don’t have enough fear of looking ridiculous!”