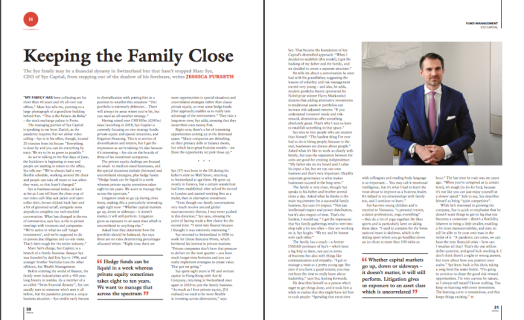 “My family has been collecting art for over forty years and it’s all over our offices,” Marc Syz tells me, pointing to a large photograph of a grandiose building behind him. “This is the Palacio da Bolsa” – the stock exchange palace in Porto. The managing partner of Syz Capital is calling me in London from Zurich, as the pandemic requires that we utilise video calling – Syz is in his office though, located 20 minutes from his house: “Everything is close by and you can do everything by train. We try to be as green as possible”.

As we’re talking in the first days of June, the lockdown is starting to ease and people are starting to return to the office, Syz tells me – we’re speak during the first days of June: “We’ve always had a very flexible schedule, working around the clock and people can take off more or less when they want, so that hasn’t changed,” he tells me in his generic European accent. Syz is business-casual today, at least as far as I can tell from the close crop of our video call: blue suit jacket and open-collar shirt, brown slicked-back hair and a bit of groomed scruff, alongside some airpods to complete our tech-enabled conversation. What has changed in the era of coronavirus, says Syz, is the in-person meetings with investors and companies: “We’re active in what we call target investments, and we’re supposed to do in-person due diligence and on-site visits. That’s been tough for the entire industry.”

Marc Syz’s charge, Syz Capital, is a branch of a family business: Banque Syz was founded by dad Eric Syz in 1996, and younger brother Nicholas runs the other offshoot, Syz Wealth Management. Before entering the world of finance, the family were industrialists with a 400-year-long history in textiles. As a member of a so-called “Swiss financial dynasty”, Syz can usually turn to someone who’s seen it all before, but the pandemic presents a unique business situation – Syz credits early lessons in diversification with putting him in a position to weather this situation: “Our portfolio is extremely defensive. … There will always be areas where you’re hit, but you need an all-weather strategy.”

Having raised over CHF300m (£245m) since launching in 2018, Syz Capital is currently focusing on two new strategy funds: private equity and special situations, and litigation financing. Some of this is in service of diversification and returns, but also, I get the impression as we’re talking, it’s because it’s interesting – Syz currently sits on the boards of three of his investment companies. The private equity dealings are focused on small- to medium-sized businesses, and the special situations include distressed and uncorrelated strategies, plus hedge funds: “Hedge funds can be liquid in a week whereas private equity sometimes takes eight to ten years. We want to manage that across the spectrum.” Litigation tends to go up during crisis times, making this a particularly interesting angle right now: “Whether capital markets go up, down or sideways – it doesn’t matter, it will still perform. Litigation gives us exposure to an asset class which is uncorrelated to anything else.”

Asked how they determine how the portfolio should be balanced, Syz says there are no rules determining percentages allocated where. “Right now, there are more opportunities in special situations and uncorrelated strategies rather than classic private equity, or even some hedge funds. [Our approach] enables us to really take advantage of the environment.” They take a long term view, Syz adds, stressing more than once that they invest their own money first. Right now, there’s a lot of interesting opportunities coming up in the distressed space: ”There are a lot of companies defaulting on their primary debt or balance sheets, but which have great business models – we [have the opportunity to] pick those up.”

Syz (37) was born in the US during his father’s stint on Wall Street, returning to Switzerland at age three. He grew up mostly in Geneva, but a certain wanderlust had been established: after school he moved to London and started working first as a trader, then in alternative investment. “Even though our family conversations very much revolve around global macroeconomic themes et cetera, I was never pushed in this direction,” Syz says, stressing the point of having made a free choice for the second time. “I went into finance because I thought it was extremely interesting.”

Syz returned to Switzerland in 2006 to work for Union Bancaire Privée, which furthered his interest in private markets: “Private companies don’t have that pressure to deliver on the next quarter – you have much longer time horizons and you can really implement strategies to create value. That got me going.” Syz spent eight years in PE and venture capital in Hong Kong with Ace & Company, returning to Switzerland once again in 2018 to join the family business. “As much as I love private equity, [I’d realised] we need to be more flexible in investing across alternatives,” says Syz. That became the foundation of Syz Capital’s diversified approach: “When I decided to establish [this model], I got the backing of my father and the family, and we decided to create a separate structure,” says Syz. He tells me about a conversation he once had with his grandfather, suggesting the lessons of volatility and risk management started very young. And also, he adds, Modern Portfolio theory (pioneered by Nobel prize winner Harry Markowitz) dictates that adding alternative investments to traditional assets in portfolios can increase risk-adjusted returns: “If you understand investors’ needs and risk-reward, alternatives offer something absolutely great. That’s why I was so keen to establish something in that space.”

Syz tries to hire people who’re smarter than himself: “The hardest thing I’ve ever had to do is hiring people, because in the end, businesses are always about people.” Asked what it’s like to work so closely with family, Syz says the separation between the units are good for creating independence: “My father sits on my board and I value his input a lot, but we run our own business and that’s very important. Healthy corporate governance is what makes businesses succeed in the long term.” The family is very close, though: Syz speaks to his father and brother several times a day. Asked what he thinks is the main requirement for a successful family business, Syz says it’s respect: “Not just intellectual respect and power distribution, but it’s also respect of time. That’s the hardest, I would say.” I get the impression that Syz family gatherings tend to veer into shop talk a bit too often – they are working on it, Syz laughs. “We try and be honest with each other.”

The family has a coach – a former INSEAD professor of Syz’s – who’s been a big help to them, not just in terms of business but also with things like communication and empathy. “I got to manage a team at a pretty young age. But even if you have a good mentor, you may not have the time to really learn about leadership,” says Syz, leaning forwards now. He describes himself as a person who’s eager to get things done, and it took him a while to realise that this might have led him to rush people: “Spending that extra time with colleagues and reading body language is so important. … You may call it emotional intelligence, but it’s what I had to learn the most about to improve as a business leader. It’s helped in my relationships with family too, and I continue to learn.”

Syz has two young children and is married to Nastassia, “a personal trainer, a dance professional, yogi, everything” – they do a lot of yoga together. He likes sports and is particularly keen on skiing these days. “I used to compete for the Swiss national team in skeleton, which is the sliding sport where you go headfirst down an ice chute at more than 100 miles an hour.” The last time he rode was ten years ago. “When you’ve competed at [a certain level], it’s tough [to do for fun], because it’s not like you can just enjoy yourself at a slower speed.” Safe to say, Syz describes himself as being “quite competitive”.

While he’s interested in growing the company, Syz is quick to emphasise that he doesn’t want things to get so big that size becomes a constraint – there’s a flexibility inherent in being a little smaller, enabling a bit more manoeuvrability, and sure, to still be able to be your own man in the midst of it. “A pandemic can come, we can have the next financial crisis – how can I weather all that? That’s the one trillion dollar question, and good luck cracking it. I don’t think there’s a right or wrong answer, but more about how you position your scales.” Syz leans back in his chair, taking a swig from his water bottle. “I’m going to continue to chase the good risk-reward opportunities. I’m very curious by nature, so I always tell myself I know nothing. You keep on learning with every investment. The learning curve is tremendous, and that keeps things exciting.”