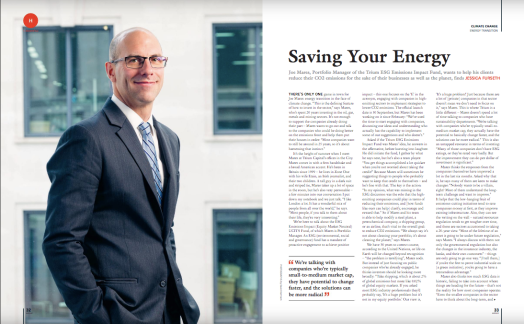 There’s only one game in town for Joe Mares: energy transition in the face of climate change. “This is the defining feature of how to invest in the sector,” says Mares, who’s spent 20 years investing in the oil, gas, metals and mining sectors,. It’s not enough to support the companies already doing their part – Mares wants to go out and talk to the companies who could be doing better on the emissions front and help them put their houses in order: “Most companies want to still be around in 25 years, so it’s about harnessing that instinct.”

It’s the height of summer when I meet Mares at Trium Capital’s offices in the City of London. Mares comes in with a firm handshake, greeting me in a broad American accent. He’s been in Britain since 1999 – he lives in zone one with his wife Etain, an Irish journalist, and their two children. A tall guy in a dark blue suit and striped tie, Mares takes up a lot of space in the room, but he’s also very personable – a few minutes into our conversation I put down my notebook and we just talk. “I like London a lot. It has a wonderful mix of people from all over the world,” he says. “Most people, if you talk to them about their life, they’re very interesting.”

We’re here to talk about the ESG Emissions Impact (Equity Market Neutral) UCITS Fund, of which Mares is Portfolio Manager. An ESG (environmental, social and governance) fund has a mandate of proactive engagement to achieve positive Impact – this one focuses on the “E” in the acronym, engaging with companies in high-emitting sectors to implement strategies to lower CO2 emissions. The official launch date is 30th September, but Mares has been working on it since February: “We’ve used the time to start engaging with companies, discussing our ideas and understanding who actually has the capability to implement some of our suggestions and who doesn’t.”

Asked if the Trium ESG Emissions Impact Fund was Mares’ idea, he answers in the affirmative, before bursting into laughter. He did initiate the fund, I gather by what he says next, but he’s also a team player: “You get things accomplished a lot quicker when you’re not worried about taking the credit!” Because Mares will sometimes be suggesting things to people who probably want to keep that credit to themselves – and he’s fine with that. The key is the action: “In my opinion, what was missing in the ESG discussion was the role that the high-emitting companies could play in terms of reducing their emissions, and [how funds like ours can help] clarify, encourage and reward that.” So if Mares and his team is able to help modify a steel plant, a petrochemical company, a shipping group, or an airline, that’s vital to the overall goal: to reduce CO2 emissions. “We always say it’s not about cleaning your portfolio, it’s about cleaning the planet,” says Mares.

We have 30 years to correct course, according to the United Nations, or life on earth will be changed beyond recognition – “the problem is terrifying”, Mares nods. But instead of just focusing on public companies who’re already engaged, he thinks investors should be looking more broadly: “Take shipping, which is about 2% of global emissions but more like 0.02% of global equity markets. If you asked most ESG industry professionals they’d probably say, ‘It’s a huge problem but it’s not in my equity portfolio.’ Our view is, ‘It’s a huge problem!’ Just because there are a lot of [private] companies in that sector doesn’t mean we don’t need to focus on it,” says Mares. This is where Trium is a little different – Mares doesn’t spend a lot of time talking to companies who have sustainability departments. “We’re talking with companies who’re typically small-to-medium market cap, they actually have the potential to basically change faster, and the solutions can be more radical.” This is also an untapped resource in terms of investing: “Many of those companies don’t have ESG ratings, or they’re rated very badly. But the improvement they can do per dollar of investment is significant.”

Mares thinks the responses from the companies themselves have improved a lot in the last six months. Asked why that is, he says many of them are keen to make changes: “Nobody wants to be a villain, right? Most of them understand the long-term challenge and want to improve.” It helps that at the low-hanging fruit of emissions-cutting initiatives tend to save companies money at first, as they improve existing infrastructure. Also, they can see the writing on the wall – natural resources regulation tends to get tougher over time, and these are sectors accustomed to taking a 20-year view. “Most of the lifetime of an asset is going to be under future regulation,” says Mares. “I always discuss with them not only the governmental regulation but also the changes in the insurance industry, the banks, and their own customers” – things are only going to go one way. “[I tell them,] if you’re the first to prove industrial scale on [a green initiative], you’re going to have a tremendous advantage.”

Mares also thinks too much ESG data is historic, failing to take into account where things are heading for the future – that’s not the reality for how most companies operate: “Even the smaller companies in the sector have to think about the long-term, and they’re thinking about their carbon footprint four or five years out.” Mares likes to tell the companies to save their cash – don’t pay it all back to investors because they’re going to need capex to pay for these initiatives going forward. It’s an unusually long term view for an investor, but it’s indicative of how he sees his role: “If you’re advising people on corporate investments, you have to take a 10-year-plus view.”

Mares (43) grew up in Washington DC, where both his parents worked in the government: “I always thought at some stage I was going to work for the government too.” Mares went to Princeton University’s Woodrow Wilson School, which prepare students for a life in public policy: “We took courses in economics, statistics and public policy, and then Wall Street gobbled us all up,” he laughs – the school has since made changes to try and avoid.

This turn of events sent Mares on an unusual track for an ESG fund manager: he started out as an energy investment banking analyst at Morgan Stanley, spending nearly eight years there ending up as executive director of equity research. He very quickly realised he wanted to be involved in business operations, instead of what he calls “sitting there and trying to figure out how we can put on another layer of debt”. Mares moved on to GLG Partners and then Moore Capital Management, both of which were focused on natural resources in emerging markets. He then spent nearly six years managing an energy, shipping, and renewables portfolio at Societe Generale, before landing at Trium Capital in 2017.

Mares’ best piece of advice came from his first equity research boss, who told him that people are spending too much energy writing overly detailed reports and having a thousand meetings a year: “My boss told me, ‘If you have a good idea, that’s more powerful than a thousand meetings.’ … We would have days where he was like, “Alright, we’re not going to speak to anyone, we’re just going to go sit and talk and think.’ That really inspired me.”

Despite his investment banking pedigree, there’s a different air about Mares – a fact that crystallises when he starts talking about his family: “My father, and grandfather too, was a chemical engineer. When I joined Morgan Stanley, my father said, ‘Wouldn’t it be great if you actually built something, like I and your grandfather did? Moving around money isn’t the only purpose in life.’” Mares pauses for a moment – he looks like he really means it. He never assumes people aren’t interested in wanting to do the right thing: “My father and grandfather were very concerned about plant safety and the environment. There are a lot of people in high-emitting industries who really take pride in what they do, and want to improve. … These organisations are very powerful when you actually provide information, and a direction for them to change.”

There are many ways to make a difference, and Mares certainly believes we need to tackle climate change – soon to be the defining problem of our time – from many fronts. He tells me about the time when he and his father considered running small-scale biodiesel plants in Ireland, only to realise it’s too hard to compete with corporations. “It was an eye-opener for me about how real change will have to be done through scale,” says Mares. “We have to use the existing capital and relationships. If we’re going to actually achieve our goals, corporations are one of the most effective tools we have.”