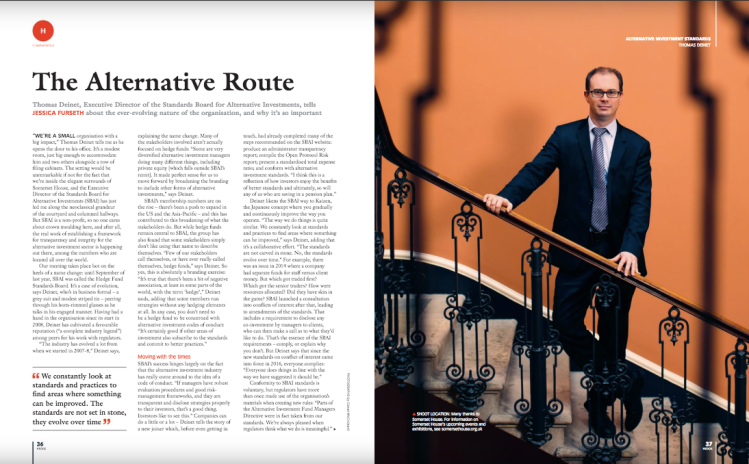 Interview with Thomas Deinet, Executive Director of the Standards Board for Alternative Investments

“We’re a small organisation with a big impact,” Thomas Deinet tells me as he opens the door to his office. It’s a modest room, just big enough for him and two others alongside a row of filing cabinets. The setting would be unremarkable if not for the fact that we’re inside the elegant settings of Somerset House, and the Executive Director of the Standards Board for Alternative Investments (SBAI) has just led me along the neoclassical grandeur the courtyard and columned hallways. But SBAI is a non-profit so no one cares about crown moulding here, and after all, the real work of establishing a framework for transparency and integrity for the alternative investment sector is happening out there, among the members located all over the world.

Our meeting takes place hot on the heels of a name change: until September of last year, SBAI was called the Hedge Fund Standards Board. It’s a case of evolution, says Deinet, who’s in business formal in a grey suit and modest striped tie, peering through his horn rimmed glasses as he talks in his engaged manner. Since having a hand in the organisation since its start in 2008, Deinet has cultivated a favourable reputation (“a complete industry legend!”) among peers for his work with regulators.

“The industry has evolved a lot from when we started in 2007-8,” Deinet says, explaining the name change. Many of the stakeholders involved aren’t actually focused on hedge funds: “Some are very diversified alternative investment managers doing many different things, including private equity [which falls outside SBAI’s remit]. It made perfect sense for us to move forward by broadening the branding to include other forms of alternative investments,” says Deinet.

SBAI’s membership numbers are on the rise – there’s been a push to expand in the US and the Asia-Pacific – and this has contributed to this broadening of what the stakeholders do. But while hedge funds remain central to SBAI, the group has also found that some stakeholders simply don’t like using that name to describe themselves. “Few of our stakeholders call themselves, or have ever really called themselves, hedge funds,” says Deinet. So yes, this is absolutely a branding exercise: “It’s true that there’s been a bit of negative association, at least in some parts of the world, with the term ‘hedge’,” Deinet nods, adding that some members run strategies without any hedging elements at all. In any case, you don’t need to be a hedge fund to be concerned with alternative investment codes of conduct: “It’s certainly good if other areas of investment to also subscribe to the standards and commit to better practices.” 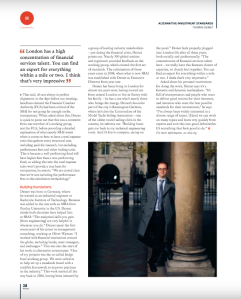 SBAI’s success hinges in large part on the fact that the alternative investment industry has really come around to the idea of a code of conduct. “If managers have robust evaluation procedures and good risk management frameworks, and they are transparent and disclose strategies properly to their investors, that’s a good thing. Investors like to see this.” Companies can do a little or a lot – Deinet tells the story of a new joiner which, before even getting in touch, had already completed many of the steps recommended on the SBAI website: produce an administrator transparency report, compile with open protocol risk reporting, present a standardised total expense ratio, and conform with alternative investment standards. “I think this example really is a reflection of how investors enjoy the benefits of better standards and ultimately, and so will any of us who are saving in a pension plan.”

Deinet likens the SBAI way to Kaizen, the Japanese concept where you gradually and continuously improve the way you operate. “The way we do things is quite similar. We constantly look at standards and practices to find areas where something can be improved,” says Deinet, adding that it’s a collaborative effort. “The standards are not carved in stone. No, the standards evolve over time.” For example, there was an issue in 2014 where a company had separate funds for staff versus client money. But which got traded first? Which got the senior traders? How were resources allocated? Did they have skin in the game! SBAI launched a consultation into conflicts of interest after that, leading to amendments of the standards. That includes a requirement to disclose any co-investment by managers to clients, who can then make a call as to what they’d like to do. That’s the essence of the SBAI requirements – comply, or explain why you don’t. But Deinet says that since the new standards on conflict of interest came into force in 2016, everyone complies: “Everyone does things in line with the way we have suggested it should be.”

SBAI standards conformity is voluntary of course, but regulators have more than once made use of the organisation’s materials when creating new rules: “Parts of the Alternative Investment Fund Managers directive were in fact taken from our standards. We’re always pleased when regulators think what we do is meaningful.” Although it’s not always perfect alignment: in the days before our meeting, headlines claimed the Financial Conduct Authority had been critical of the SBAI for not going far enough on fee transparency. When asked about this, Deinet is quick to point out that this was a comment from one member of a working group, before providing a detailed explanation of what exactly SBAI wants when it comes to fees: to have a total expense ratio that gathers every structural costs, including paid-for research, but excluding performance fees and other trading costs. This is because a well-performing fund will have higher fees than a non-performing fund, so adding this into the total expense ratio won’t provide a true basis for comparison, he asserts. “We are crystal clear that we’re not including the performance fees into this calculation methodology.

Deinet was born in Germany, where he trained as an industrial engineer at Karlsruhe Institute of Technology. Business was added to the mix with an MBA from Purdue University in the US. Deinet thinks both elements has helped him at SBAI: “The analytical skills you gain [from engineering] is very helpful in whatever you do.” Deinet spent first seven years of his career in management consulting, working at Oliver Wyman: “I worked with financial institutions around the globe, including banks, asset managers, and exchanges.” This was also the start of his work in alternative investments: “One of my projects there was the so-called hedge fund working group. We were called in to help set up a standards board with a credible framework to improve practices in the industry.” This work started all the way back in 2006, having been initiated by a group of leading industry stakeholders – pre-dating the financial crisis, Deinet points out. Nearly 300 global entities and regulators provided feedback on the working group, which created the first set of standards. The culmination of those years came in 2008, when what is now SBAI was established with Deinet as Executive Director from year one.

Deinet has been living in London for almost ten years now, having moved out from central London to live in Surrey with his family – he has a son who’s 2.5 who brings the energy. Deinet’s favourite part of the city is Kensington Gardens, where he’s also the Commodore of the Model Yacht Sailing Association – one of the oldest model sailing clubs in the country, he informs me. “Building boats gets me back to my technical engineering roots. And it’s fun to compete, racing on the pond.” Deinet feels properly plugged into London life after all these years, both socially and professionally: “The concentration of financial services talent here – we really have this fantastic cluster of expertise, so closely knit together. You can find an expert for everything within a mile or two. I think that’s very impressive.”

Asked about his personal motivations for doing the work, Deinet says it’s a fantastic and dynamic marketplace. “It’s full of entrepreneurs and people who want to deliver good returns for their investors, and investors who want the best possible standards for their investments,” he says. “I’ve always been widely interested in a diverse range of topics. [Here] we can work on many topics and learn very quickly from experts and turn this into good deliverables. … It’s something that feels good to do.”