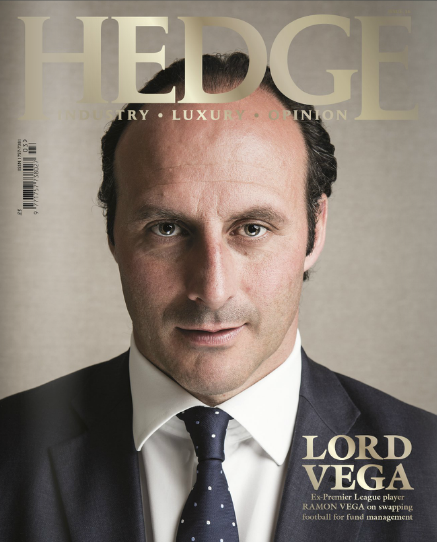 Ramon Vega takes up a great deal of space in the room. He’s tall and broad, slicked-back hair and sharp suit, going in with a firm handshake and a big smile. He should be an imposing presence, but he’s really not – in fact, the most striking thing about Vega is how friendly he is. Later I’ll mention the meeting to a few football fans, who’ll all concur: “Oh, the ex-Spurs player! He’s a nice guy, isn’t he.”

Sports metaphors are all over the world of business, but it’s rare to find a financier with this level of personal experience. Vega is the founder of Vega Swiss Asset Management, but his CV is unusual: Vega was a professional football player for 17 years, most prominently with Tottenham Hotspur. So perhaps it’s fitting that the first thing Vega wants to talk about is ‘From Pitch To Boardroom’ – Vega is co-CEO of Stuart Blyth’s venture for using football methodology to inspire corporate leaders to select and nurture winning teams. 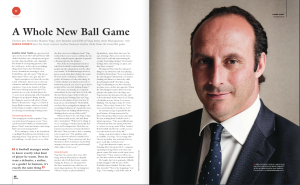 The winning team formula
“I’m merging two worlds together. I was a professional footballer, an international player. Then I went into the world of finance, into hedge funds and asset management,” says Vega. We’re sitting in a suite at the Landmark, a top-drawer Marylebone hotel which is very imposing indeed. Speaking in his European accent, Vega continues: “But as I was building a second career, as we call it, the first career was calling me back.” Vega realised there was a way to combine the two worlds, using sports to provide a fresh perspective for business.

One lesson from football is understanding that people run the organisation, not the other way around: “A football manager needs to know exactly what kind of player he wants. Does he want a defender, a striker, a goalie? In business, it’s the same thing. … As a CEO, whether you inherit your team or build from scratch, you need to get to know people before you start making changes.”

Of course, one benefit of a corporate environment is that you won’t have to deal with the Luis Suarez-types of this world and their biting habits. But, says Vega, there are plenty of egos also in business: “Oh absolutely! In football, you have these young players trying to be everything. In finance, it’s exactly the same! These young traders are making all this money, thinking they’re on top of the world.”

What you have to do, says Vega, is take your Suarez-style trader, and turn them into a team player: “What you’re trying to do, as manager, is make your people feel good, and feel important. Then they are loyal to you, because you made them feel like that. Then you start to have a winning team around you.” The problem, adds Vega, is that lots of bosses actually don’t like managing: “They want to go and fix it themselves! But I don’t know any football manager who goes onto the pitch himself if the striker doesn’t score.” 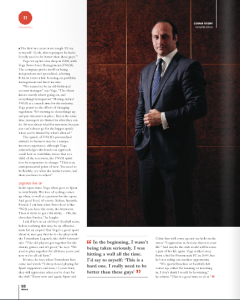 Good fortunes
Vega lives in London these days, after being born in Switzerland to Spanish parents who’d left their home country during the Franco era. Vega played for the Swiss national team, an interesting experience for an immigrant: “When I started to play football for Switzerland’s national team, when I had the cross,” he says, drawing a Swiss cross on his chest, “then you’re suddenly representing the country! Something changed. I kind of have mixed feelings: first of not being accepted, then later, accepted.”

Having said that, Vega has only good things to say about his early days playing football in Switzerland: ”I was very lucky at the Grasshopper Club Zurich, as I studied banking and finance at university while also playing football.” Not that young Ramon was planning to use this education any time soon – in fact the opposite. When the Grasshoppers wanted him, it was his parents who pushed for schooling, and Vega became the first player for the club to have this kind of play-study deal. “Being a footballer was my dream. I was never thinking: ‘Am I going to make it?’ It was always: ‘This is what I want to do!’ I was very, very lucky that I was able to do it.”

In retrospect, Vega is grateful for the good fortune of being surrounded by forces who pushed him towards education. Because retiring from football can be a brutal experience: “The most difficult part of retirement from any sports profession is – where do you go? … When I retired from football, the first two, three years, those were the hardest years of my life.” Being a top level athlete is akin to living in a bubble, says Vega: “I was doing what I loved, my hobby! And suddenly I had two go to work, like everybody else!”

Vega’s first financial venture was co-founding of Duet Group in 2002, a company operating in hedge funds, real estate and private equity. His name would open doors, Vega found: “They wanted to talk to me, yes. But they want to talk about football!” He laughs, but it was tough: people struggled with the idea of this footballer-turned-banker. I ask if they took him seriously: “Not at the beginning. I was hitting a wall all the time. The first two years were difficult. I’d say to myself: ‘Gosh, this is going to be a hard one. I really need to be better than these guys!’”

Vega set up his own shop in 2008, with Vega Swiss Asset Management. The company prides itself on being independent and specialised, advising US$1 billion in assets while focusing on portfolio management and fixed income. “We wanted to be an old-fashioned account manager. The client knows exactly what’s going on, and everything’s transparent.” Having started VSAM at a crunch time for the industry, Vega points to the effects of changing regulation: “I think it’s starting to clean things up and put structures in place. But at the same time, fund managers are limited in what they can do. It’s not always ideal for investors, because you can’t always go for the bigger upside when you’re limited in what you’re allowed to do.” The upside of VSAM’s personalised attitude to business may be a unique investor experience, although Vega acknowledges this hands-on approach may lead to scalability issues. But as a child of the recession, the VSAM spirit is to be responsive to change: “This is an entrepreneurial point of view. You need to be flexible, see what the market wants, and then you have to adjust.” 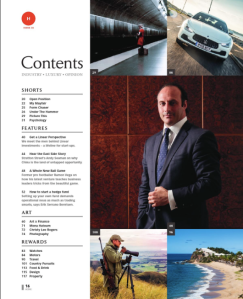 Legends live on
Vega (44) often goes to Spain to visit family: “I love Spain. It’s a very nice place to go.” His love of cycling comes up several times, as well as a passion for the opera. And good food of course: Italian, Spanish, French. I ask him what Swiss food is like: “Well you have the rösti, the bratwurst. Then it starts to get a bit tricky … Oh, the chocolate fondue!” He laughs.

I ask if he’s on an old boys’ football team, before realising that may be an offensive term for an ex-pro? But Vega’s a good sport about it of course, nice guy that he is – he plays with the Tottenham Legends: “The old players get together for the charity games, and it’s great. We used to play together for all those years, and now we’re old farts!”

It’s nice, he says, when Tottenham fans come and watch: “I always loved it when I would play for Spurs supporters, and now, 15 years later, they still appreciate what you’ve done for them.” Every now and again, Spurs and Celtic fans will to say hello in the street: “I appreciate that, because that was your life.” And just maybe, club life may become a part of his life again: Vega walked away from a bid for Portsmouth FC in 2009, but he’s not ruling out considering another opportunity: “If a sports franchise or football club comes up, either for running or investing in, I don’t think I would be hesitating! This is a good time to do it.”