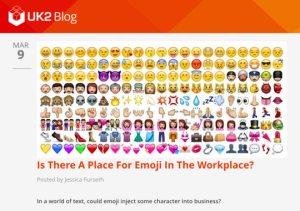 In a world of text, emoji will save our souls

What’s in your list of recently used emoji? My list has the screaming cat, the gun, and the smiley with the hospital mask. Can you tell I’ve been ill? It may be too much information to provide a long description of how many packs of tissues I’ve gone through, but a quick 🙀🔫😷 tells the story succinctly, and probably more gracefully too.

Emoji – the Japanese neologism that means “picture word” – had every marking of a fad in their earliest days, first appearing in Japanese mobile phones in 1999. But as a fresh batch of emoji is are set to see the light of day this year, it looks like the fad is here to stay. Sure, they may seem silly, but they do actually have a use in that they allow subtle nuance to be added to a conversation. We’ve all had misunderstandings because it’s so hard to convey tone in a text message. Emoji solves that. You can be as deadpan sarcastic in a text as you want now, but just add a winking smiley at the end. Or maybe add the monkey cheekily covering its face while laughing – emoji has so many more fun options to choose from than just the regular ‘smileys’.

With so much communication taking place electronically, emoji make an important addition to language, thinks Fred Benenson, who works at crowdfunding platform Kickstarter. But then he would, as he painstakingly translated the whole of Moby-Dick into emoji. “The fact that emoji is available in software legitimises it as a form of human expression,” Benenson told New York Magazine. “And especially now – we’re so intimate with these devices and we’re saying some of our most compelling things to each other in the form of text messages and social media.”.

It’s similar to why we like hitting “like” on Facebook instead of leaving a comment: it lets us signal a feeling without having to commit to words. Having to type something out in full in an email can feel so definitive, whereas the odd emoji thrown in offers the chance to add a nuance or sentiment that normally would have been conveyed via facial expressions.

While the jury is out as to the place of emoji in business, it is worth taking note of this trend, in part because the technologies people like to use with friends have a tendency to seep into the workplace. But as colleagues increasingly work remotely, emoji could be just the ticket to re-introduce some of that non-verbal interaction that is lost when people don’t work in the same room anymore.

If this is your bag, have a look at Emoj.li, an emoji-only communications app that creators Matt Gray and Tom Scott swear is not satire. ‘FastCompany’ asked the founders whether the internet really needs an emoji social network: “It doesn’t. It really doesn’t. But the internet didn’t need Twitter either, and look where we are a few years later…” Devoted emoji fans are creating entire stories using only emoji – just look at this retelling of the storyline of ‘Les Miserables’. Then, go and watch Taylor Swift’s ‘Shake it off’ illustrated by emoji – it’s even catchier this way, if that’s possible. There’s no doubt about it: the future comes with pictographs, and the emoji is written on the wall.