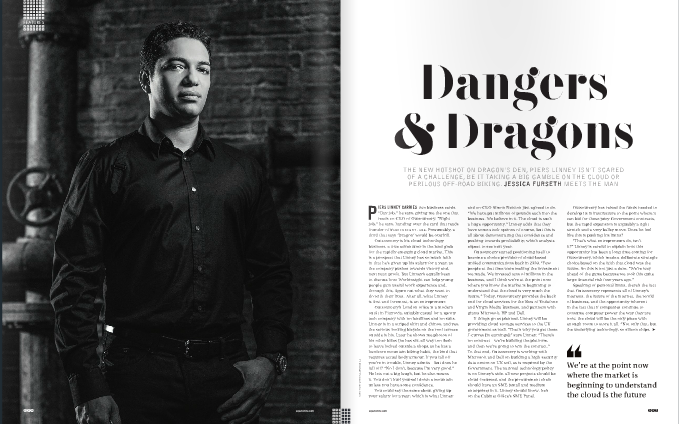 Dangers and Dragons: Interview with Piers Linney
Piers Linney carries two business cards. “Day job,” he says, giving me the one that reads co-CEO of Outsourcery. “Night job,” he says, handing over the card that reads founder of Workinsight.org. Outsourcery is his cloud technology business, a true adventurer in the “land grab” for the rapidly emerging cloud market. This a prospect that Linney has so much faith in that he’s given up his salary for a year, as the company pushes towards victory and next year: profitability. But Linney’s equally keen to discuss how Workinsight.org can help young people gain useful work experience, and thorugh this, figuring out what they want to do with their lives. After all, what Linney is above all, is an entrepreneur.

Outsourcery’s London office is a modern outfit in Fitzrovia, suitably casual for a sporty tech company with no landlines and no suits. Linney is in a striped shirt and chinos, and yes, the serious-looking bicycle on the roof terrace outside is his. Later he shows me photos of his other bikes (he has six, all way too flash to leave locked outside a shop), as he has a hardcore mountain biking habit, the kind that requires actual body armour. If you fall off you’re in trouble, Linney admits, but he doesn’t fall off: “No I don’t, because I’m very good.” He lets out a big laugh, but he also means it. You don’t hurl yourself down a mountain unless you have guts.

Cloud or bust
You could say the same about giving up your salary for a year, which is what Linney and co-CEO Simon Newton just agreed to do. “We have put millions of pounds each into the business. We believe in it. The cloud is such a huge opportunity!” Linney adds that they have some stock options of course, but this is all about demonstrating confidence and pushing towards profitability, which analysts expect to see next year.

Outsourcery started positioning itself to become a choice provider of cloud-based unified communications back in 2009: “Few people at that time were making the investment we made. We invested tens of millions in the business, and I think we’re at the point now where you know the market is beginning to understand that cloud is very much the future.” Today, Outsourcery provides the back end for the cloud services for the likes of Vodafone and Virgin Media Business, and partners with the likes of Microsoft, HP and Dell.

If things go as planned, Linney will be providing cloud storage services to the UK government as well. “That’s why you get these J-curves [in earnings],” says Linney: “There’s no contract – we’re building the platform, and then we’re going to win the contract.” To that end, Outsourcery is working with Microsoft and Dell on building a high-security data centre on UK, as is required by the government. The national technology policy is on Linney’s side: all new projects should be cloud-focused, and the procurement chain should have a SME (small and medium enterprise) in it. Linney would know: he’s on the Cabinet Office’s SME Panel.

Outsourcery has raised the funds needed to develop its infrastructure to the point where it can bid for these juicy government contracts, but the rapid expansion is arguably a tight stretch and a ballsy move. Does he feel like this is pushing his limits?

“That’s what entrepreneurs do, isn’t it?” Linney is careful to explain how this opportunity has been a long time coming for Outsourcery, which made a deliberate strategic choice based on the faith that cloud was the future. So this is not just a dare: “We’re way ahead of the game because we took this quite large financial risk four years ago.”

Speaking of personal limits, there’s the fact that Outsourcery represents all of Linney’s interests: the internet as the next big thing, the world of business, and the opportunity inherent in the fact that if companies continue to consume computer power the way they are now, the cloud will be the only place with enough room to store it all. “Not only that, but the underlying technology, so silicon chips, that has to change too – to a faster, more lightweight, more resource-intensive way of providing computing power and storage. Otherwise we’re going to run into a wall very hard. The cloud is just a step in that direction.”

Vision, risk, pain, business
Linney’s faith in the internet and cloud as a serious business tool was part of the reason he left investment banking 14 years ago. “It was a different time then,” he says, referring to the dot-com mania: “When I left Credit Suisse in 2000, I raised £700,000 while leaving the building, to do an internet start-up. Those days have long, long gone.” Still, there are probably more talented entrepreneurs in the UK now than back then, many of who will start their careers in a corporate environment before heading out on their own. Like Linney: he studied law at university before qualifying as a solicitor, “as that’s what you did”. Keen to do something more business-related, he soon moved into investment banking: “I loved working in the City. So I had legal and financial experience, and I used that to put a business plan together and raise money. Those are very, very useful skills. When the internet came along I saw an opportunity to step out of what was by then a quite well-paid job, and go and do what I really wanted to do.”

Not that Linney always knew exactly what he wanted to do. He never planned out his route, although an entrepreneurial drive has been apparent since he started his first business venture at age 13: “My core skill set is very much investment, structuring, corporate finance.” So is that what motivates him? “No, that’s just what you need to do to get your business going.”

So what does motivate him? Linney thinks for a bit. “I need to answer that carefully. It’s building something …” He laughs: “Well, as entrepreneurs, you want to prove you were right! So you will say, I had a vision, I’ve delivered it, I’ve executed it, I’ve created value. You have many sleepless nights, you know it takes something out of you to build a business. It’s personally quite painful, quite risky.” Then, hopefully, he’ll be able to do what he wants: support his family, his friends, make sure his daughters are supported. “And then, when you’ve filled your glass and it starts to overflow, then what I’m interested in is building social businesses that can actually scale.”

This is where Workinsight.org comes in, clearly a passion project judging from Linney’s enthusiasm when he’s talking about it. It’s partially about helping young people figuring out what they want to do with their lives, and making work experience available to those who lack the right connections. But it’s also about creating an infrastructure for passing on this knowledge in an efficient, scalable manner: “I’ve got lots of big company names signed up. What we’re doing right now is a pilot as we get the process right. It will be a mobile phone app, basically. It links to Outsourcery too because it’s cloud, it’s digitising a process, it’s automating it so you can scale it.”

Work-life merger
On top of everything else, Linney is raising a young family with wife Tara: their daughters Tiger and Electra are three and six. He’s not too keen on sharing details about his personal life, but he will talk at length about how much he loves daredevil-style mountain biking, and he recently got a skipper licence too. Just don’t expect any breezy days on the Thames: “Oh no, it’s a very fast boat. It’s a power boat, it’s huge!” He laughs. “But most of the time I’m working. That’s the challenge of being an entrepreneur: finding time, and finding the balance between the pressures of building a business and having a young family. And then to actually do the things you love doing as well.”

Whether sitting in the hotseat on Dragons’ Den is work or play is unclear, but I’m starting to suspect that Linney doesn’t really separate between the two. “My hope is that I attract more technology entrepreneurs, because historically, Dragons’ Den hasn’t seen a lot of tech opportunities. […] Most economies and empires are built by entrepreneurs. But once you get past your family and friends funding, maybe a small venture capital round, if you want to get big you need to raise three, four, five million. That, in this country, is quite a tricky spot.”

Still, Linney seems to enjoy being on the smaller end of the spectrum, readily admitting he’d probably step aside rather than run Outsourcery as a FTSE100 company. “When you get to that level you’re dealing more in governance, and I’m an entrepreneur. When it gets to that scale, I don’t think I would be running the business. I’ll be building the next one. […] I’ve sat at every side of the table: I’ve been an advisor, I’ve been an investor, I’ve done leveraged buy-outs, hedge funds, started companies, turned companies around, bought, sold, merged. So there’s not much there that fazes me.” And he’s still only 43: “I’m older than I look.” He laughs. “I’ve got moisturiser!”