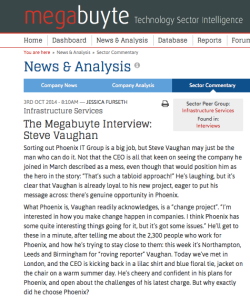 The Megabuyte Interview: Steve Vaughan
Sorting out Phoenix IT Group is a big job, but Steve Vaughan may just be the man who can do it. Not that the CEO is all that keen on seeing the company he joined in March described as a mess, even though that would position him as the hero in the story: “That’s such a tabloid approach!” He’s laughing, but it’s clear that Vaughan is already loyal to his new project, eager to put his message across: there’s genuine opportunity in Phoenix.

What Phoenix is, Vaughan readily acknowledges, is a “change project”. “I’m interested in how you make change happen in companies. I think Phoenix has some quite interesting things going for it, but it’s got some issues.” He’ll get to these in a minute, after telling me about the 2300 people who work for Phoenix, and how he’s trying to stay close to them: this week it’s Northampton, Leeds and Birmingham for “roving reporter” Vaughan. Today we’ve met in London, and the CEO is kicking back in a lilac shirt and blue floral tie, jacket on the chair on a warm summer day. He’s cheery and confident in his plans for Phoenix, and open about the challenges of his latest charge. But why exactly did he choose Phoenix?

“Well the first thing to say is, I like being in charge! Also, it’s an interesting size company both in terms of revenue and the number of people.” He thinks for a moment. “I couldn’t do a start-up. My wife’s done a couple of start-ups, good for her! But not for me. I worked in EDS for over ten years so I’ve done the big corporate, which was fine while it lasted. But Phoenix is an interesting size because it’s got the scale to do interesting things – be quite complicated and achieve things, but it’s small enough that you can get half a dozen people around a table, make a decision and tomorrow we’re doing it.” Then there’s the fact that Vaughan quite likes a turnaround: “I think there’s an opportunity to work with the market rather than fight against it. Make a change that can work for the next five or ten years, rather than just thinking about what’s done in the past.”

Strategic change
Vaughan has implemented a three-step plan for Phoenix, which he says has been met with relief: “The biggest issue when I joined Phoenix was no strategy.” He is respectful of his predecessors, yet honest about he found when he joined: “The company was crying out: “Where are we going, what are we doing, what are we about, what’s our aim?” Vaughan has spent most of his time to date rolling out his strategy internally: “You can do all this fancy stuff with investment and strategies, but actually what you’re trying to do is change 2300 people’s behaviour.”

Because what Phoenix is, as its core, is a service business. The Business Continuity and Managed Services sections are likely to become increasingly converged, as the middle market takes up Cloud. The large-scale Partner section, which works with IT outsourcers, is likely to stay more separate: “Given the history of the company, stability is one of the things it needs now. I don’t want to blow the whole thing up for some relatively short-term benefits.”

Having said that, Vaughan has plenty of plans for change: “I’ve characterised this financial year [to 31st March] as ‘Get Ready’. To be clear about strategy.” Then next year it’s all about account management and standardised services: “We’re doing a whole series of things that sound quite basic, but the basics need to be in place.” This includes things like changing how the salesforce deals with customers, ensuring a uniform service offering, getting the technical staff out to meet customers, that sort of thing. “A target-rich environment, loads to do.” Vaughan laughs. “How hard can it be!”

Technology journey
That Vaughan’s confidence comes across as reassuring is a feature of his experience: this is his fourth turnaround project. Vaughan (54) first got his degree in archaeology, writing a dissertation on the budding use of technology in the field: “It was quite a good dissertation actually!” Afterwards he went to Honeywell, where he learned to programme on punch cards on an IBM 370 mainframe: “I worked on some really interesting projects there for five years, including computerisation of murder enquiries after the Yorkshire Ripper case.”

Then came SD-Scicon which was acquired by EDS, where Vaughan spent a total of 14 years working on projects of increasing sizes: “One was building air traffic control systems, that was fascinating. That’s a proper job! Really, really interesting.” Moving into general management, Vaughan was in charge of EDS’s UK aviation business, eventually running the transport business for EDS in the UK. “Oyster Card was a big project we did. One of the first IT PFIs, still working today. A really good project! A massive project.”

Vaughan’s first turnaround project was EDS’s private sector business, a “Cinderella” part of the organisation: “It took … well I did that job for four years, and it took two years before it started to turn around. Three years before it was job done, and in the fourth year we sold $5bn of business to the private sector.”

Then in 2000, just as the hard work was starting to pay off, Vaughan left to run Synstar. I ask if it’s only fun while it’s hard, and while Vaughan laughs, it may not be far from the truth: “Well, yes really! It was definitely job done. I did briefly run the whole of the UK for EDS. […] I felt that if I stayed at EDS much longer I’d probably end up retiring from EDS. So I thought it was time to look at other things.” Synstar was an interesting prospect in terms of size, not dissimilar to Phoenix actually, also in need of a turnaround and lacking in focus.

All about focus
The issue of focus is something Vaughan comes back to several times: “You have to concentrate on doing a few things really well. The endless ‘Oh we’ll add another thing to the portfolio!’ – is fatal. Businesses lose their way when they’ve lost focus. Particularly in a turnaround. There’s only a finite number of things, quite a small number of things, you can really concentrate on doing well. So every time you write something on the to-do list, cross three things off.”

Synstar is a good example of this: the company had ten European subsidiaries when Vaughan joined, eight of them losing money. Vaughan exited Italy and Switzerland almost right away, and reckons he should have done the same for France too, instead of spending two years trying to sort it out. “There was a rationale that said, ‘Oh you have to be a European business.’ No you don’t. You have to be a profitable business!”

Not that Vaughan doesn’t have an appetite for the occasional bit of risk-taking: “Well, I left EDS to go to a company which might have been bankrupt in a few months!” Not to mention that he followed Synstar with Communisis, which wasn’t even an IT business: “I was interested to see whether all this would work in another sector. If anybody in IT thinks they’re in a commodity business, they haven’t seen a print business. Good grief! […] But it was clear that a lot of the same techniques worked. It was interesting, very, very interesting.”

An interesting life
Vaughan uses that word about almost everything he’s done, as he describes each venture in cheerful, detailed anecdotes. He’s clearly spurred on by interest and discovery, including a “terrifying but interesting” stint as Chairman of Charteris, where he turned around a company on the brink of insolvency in five months. “I’m not driven by money really. I’ve got enough. I didn’t need to come to Phoenix. I wanted to do it because it looks like a very interesting challenge, somewhere where I can make a difference. I quite like the people I am working with.”

Vaughan lives in Sussex with his wife, who runs a public relations firm specialising in crisis management. While no strangers to high-risk decisions, it’s clear that the decision to tear their house down and build a new one was a challenge. For once, Vaughan doesn’t call the experience interesting: “Everybody says if you build your own house you can have whatever you want, but you can’t. You can have what you can afford, and there’s a million decisions!” Vaughan seems exhausted at the memory. “We had a discipline: two decisions every night. Once you’ve made a decision, you couldn’t change your mind. It was ruthless.”

Decision-making is a little different in business though: “The important skill is knowing the right time to make a decision, which in many cases is straight away but in a few cases it’s [best] to let it run for a bit and see how it develops. I think that’s experience. I suppose it’s also partly makeup. I think I’m decisive.” This process also means talking to lots of people in the business: “A lot of people have 10% of the answer, cluttered up with lots of things that aren’t part of the answer.” Vaughan’s job is to be the one who can step back and put all these pieces of 10% together, and make a plan for the whole. “But how much of the plan is me thinking it up out of my own imagination? Not very much, I’m relieved to say.”