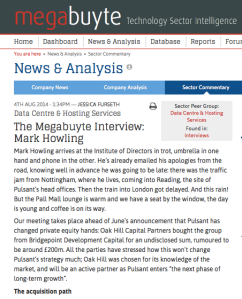 Mark Howling, CEO of Pulsant
Mark Howling arrives at the Institute of Directors in trot, umbrella in one hand and phone in the other. He’s already emailed his apologies from the road, knowing well in advance he was going to be late: there was the traffic jam from Nottingham, where he lives, coming into Reading, the site of Pulsant’s head offices. Then the train into London got delayed. And this rain! But the Pall Mall lounge is warm and we have a seat by the window, the day is young and coffee is on its way.

Our meeting takes place ahead of June’s announcement that Pulsant has changed private equity hands: Oak Hill Capital Partners bought the group from Bridgepoint Development Capital for an undisclosed sum, rumoured to be around £200m. All the parties have stressed how this won’t change Pulsant’s strategy much; Oak Hill was chosen for its knowledge of the market, and will be an active partner as Pulsant enters “the next phase of long-term growth”.

The acquisition path
Chances are this will mean another acquisition for Pulsant, as right now, all the elements owned by the data centre and hosting group are integrated. “It’s turned out almost exactly as we wanted it. Probably better than any strategy I’ve worked with. We’re quite disciplined about what we bought and why we bought it,” says the CEO. Pulsant is the result of four companies brought together by Bridgepoint, starting with Lumison in 2010 (when Howling joined), adding Blue Square Data and DediPower in 2011, and ScoLocate in 2012.

Once every 12-18 months sounds about right as an acquisition pace, says Howling, who’s got his eye on a couple of options: “I’d be disappointed if we didn’t make another acquisition by the end of this year.” At the moment, Pulsant has ten data centres, deriving 60% of its revenues from colocation, 30% from hosting and Cloud, and 10% from managed networks. Asked what a new acquisition may look like, Howling suggests they may be interested in adding new capability: “Managed security, managed back-up, secure Cloud back-up. Managed mobile devices is a big area.” But he’s not ruling out scale or new geographies (even Europe), as the latter is important especially for colocation services.

From colocation to Cloud
The rush of the morning trek has dissipated now, and the CEO is relaxed and chatty, so I decide to risk the flip question: Why colocation? Instead of renting space for your own servers, wouldn’t it be easier either to keep everything in-house, or outsource the whole lot? Howling laughs, before acknowledging that companies are indeed increasingly moving to managed hosting or Cloud storage. Colocation, he explains, is often an option for businesses who want to store kit which still has a few years of life left in it. “Also, it could be they have some mission-critical software and don’t want to risk somebody else looking after it, but they’re not big enough to to build their own data centre. Or increasingly they’d need two data centres; you often want to split between two for resilience. In the mid-market, which is where we tend to work, that’s particularly the case.”

The current weighting of colocation in the Pulsant business is partially because of the acquisitions, but Howling also believes it differentiates Pulsant among hosting peers. A customer may start with colocation services, but may move to Cloud later without changing provider: “Whatever service they take to start with, they know they can always change the service they take from us if their needs change, because we have all three elements. We’ve had a lot of examples of that in the last year. … Going forward, we are seeing the Cloud area, or Infrastructure-as-a-Service, growing much faster than colo.”

Speaking of customers, Pulsant’s rolodex also includes the Queen; the Royal Warrant of Appointment is printed on the CEO’s business card. “Ah yes, we host the royal family’s websites!” There are rules to getting the badge, Howling explains, including a certain value and duration of the service, and it’s only awarded if the users, in this case the royal household, are happy with the product. Not that the royal family is more important than any other customer of course, but certainly: “It’s quite nice to have that!”

From big to small
Before joining Pulsant, Howling (52) has had a career of two halves. First came a decade of working for large corporations, after a civil engineering degree: “I started in the Mars group on a management trainee course. Then I went to what was Coopers & Lybrand (now PricewaterhouseCoopers), where I was a management consultant. That was a deliberate career choice, to get accelerated experience with lots of different companies. Then I went to a large telecoms company, before I joined a PLC, Compel, which was really good training in setting objectives, understanding finance, … marketing, sales and managing people. That was great experience in that respect.”

Things had run pretty smoothly for Howling until this point, he readily admits. That soon changed when he found himself running Compel’s computer reselling unit when the dot.com crash happened. “Our sales started to drop off. We’re working really hard, day and night. That year was the hardest time in my whole career. We didn’t hit the budget, and we had to make a profits warning. Ultimately, I had to leave as a result of that. That was the first time in my career that something’s gone so wrong. Whether it was my fault or not, it doesn’t matter when you’re in a PLC. If you don’t deliver the results the City expects, somebody has to take the blame, and it was right that I did.”

After this, Howling decided to make the move over to smaller businesses. “I’d been thinking that I’d like to try and do a management buy-in at some point, where I’ve got a stake in the company. I was at an age where if I didn’t do it now, I’d never do it. I was also at an age where I felt I had enough experience and confidence to give it a go.” This was in 2001. “At the time, what happened was horrible. In hindsight, it was one of the best experiences I ever had. When you’re running a business with a tiny margin, which reselling computers has, and your sales are shrinking, it makes you realise how careful you have to be about spending money. Certainly about making investments you’re not certain about. Things don’t always go like you expect.”

An entrepreneurial streak
Today, Howling maintains that sense of caution, keeping a keen eye on things as they develop; perfection is a rare thing. He has a personal stake in Pulsant, about 7-8%, but this is his own money he’s put in, he stresses, not shares he’s been given. And yes, it would be painful to lose that money: “It does make you behave like this is your business. This is your own money you’re spending.”

Howling also believes his background in the corporate world has helped him be “a reasonably good manager” of people and businesses: ”I guess I’d call myself a professional manager that’s also got an entrepreneurial streak, rather than an out-and-out entrepreneur or corporate manager.” He often works with people from his previous ventures, including his Chairman at Compel. “But I wanted to work in a smaller business, one that’s that’s faster growing, more dynamic. I don’t normally dress like this,” he says; the CEO is a dark blue suit, cufflinks and a subtly patterned tie today, due to meet shareholders later. “I usually wear jeans and a shirt like most of our customers and employees. … We can communicate with [our backers] in a way they understand, but at the same time can get on with things very fast within the business.”

Financial performance is one motivating force for Howling, insofar that it’s an external measure of success. “But the day-to-day driver is building a business that we’re proud of. … We want to build a business with a really good reputation for being a professional, premium business. We try to manage people professionally and with integrity, and build a business with that reputation; we want to be proud of who we work for.”

The variety factor
Pulsant is the best job he’s ever had, says Howling, who likes variety and admits to boring easily. More than once during our chat he’s been the one asking questions, keen to hear other perspectives. He is married and has two children in their late teens, who are now deciding what to do with their lives:

“That generation, I think, are much more open-minded. They might set up their own business, go into charity, or work abroad for a few years. … In my day, if you didn’t get a job or start your own business, it was quite hard to get a job two years later if you hadn’t started on that treadmill. Now you can do something else for a few years, and then come back to do a regular job if you want. That’s exciting.”

Howling loves sports and plays football regularly; he’s moved over to what they call the ‘veterans’ team but it’s still 11-a-side, mind. He was in a punk band in his late teens and they even did a few John Peel sessions, but ultimately decided to go for a career less likely to necessitate dumpster-diving, he laughs. “I play guitar, piano, and sing a bit still. There’s never enough time to do everything. … I’ve had this job for three and a half years now and things change so much. We were a small company when we first started. We bought three other companies. We’ve grown. We’ve changed. We’ll do more of that. It keeps it interesting.”