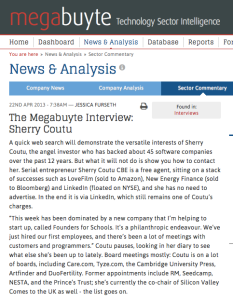 The Megabuyte Interview: Sherry Coutu
A quick web search will demonstrate the versatile interests of Sherry Coutu, the angel investor who has backed about 45 software companies over the past 12 years. But what it will not do is show you how to contact her. Serial entrepreneur Sherry Coutu CBE is a free agent, sitting on a stack of successes such as LoveFilm (sold to Amazon), New Energy Finance (sold to Bloomberg) and LinkedIn (floated on NYSE), and she has no need to advertise. In the end it is via LinkedIn, which still remains one of Coutu’s charges, that I finally manage to get in touch with her, after the professional network shows me we have a joint contact who agrees to make the introduction. But once you get past the barricades, Coutu is more than approachable, even if we have to reschedule three times to fit out chat into her busy schedule.

“This week has been dominated by a new company that I’m helping to start up, called Founders for Schools. It’s a philanthropic endeavour. We’ve just hired our first employees, and there’s been a lot of meetings with customers and programmers.” Coutu pauses, looking in her diary to see what else she’s been up to lately. Board meetings mostly: Coutu is on a lot of boards, including Care.com, Tyze.com, the Cambridge University Press, Artfinder and DuoFertility. Former appointments include RM, Seedcamp, NESTA, and the Prince’s Trust; she’s currently the co-chair of Silicon Valley Comes to the UK as well – the list goes on.

An entrepreneurial outlook
The companies under Coutu’s charge may seem diverse, but the point where LinkedIn proves its real-life usefulness is an aha-moment which seem to be commonplace when running through the list of her investments. It’s clear she has a knack for backing companies which are addressing an everyday problem. “I think there’s a huge amount of symmetry between everything that I do. I’ll give you an overview. When I floated my company 12 years ago, I felt I hadn’t been spending quite as much time as I would have wanted on giving back to the community,” says Coutu, referring to retail finance services group Interactive Investor, which she founded in 1995 and floated in 2000 for £242m. “I decided I would split up my week in the future, and spend one or two days a week on philanthropy. And because I got a buzz out of business, I would spend three or four on for-profit things. That’s still how I try to run my life.”

Coutu adds between two and four new businesses to her stack every year, but when asked about what motivates her it’s the non-profits that come up first. Still, the vein of technology and entrepreneurship runs through also these elements. Take Cancer Research UK’s Crick Institute, where Coutu focuses on how big data can help solve problems, in this case curing disease; “This isn’t actually any different from what I do in my for-profit businesses, because it involves the utilisation or leveraging of clever new technologies that decrease cost or increase the ability to do something you couldn’t do before.” Coutu also sits on the finance board of Cambridge University, the institution at the heart of the town that’s home for the Canadian native. This is an organisation that needs not be concerned about making payroll, but is still in the market for insights into how to maintain its top position: “The University wanted an entrepreneur to join so they could understand how we view the industry, and that’s partially what I help them do. It’s hard not to see the world from an entrepreneur’s eyes, because that’s definitely what I am.”

The marketplace connection
But back to the technology companies. The theme for Coutu’s interest is the presence of a market place, she says, broadly defined as joining people who want things with people who have things. Take online film rental business LoveFilm: Coutu was an early angel investor in Screenselect, which merged with Video Island and then with LoveFilm, which then exited to Amazon in 2011 for $317m. “We were trying to make it easy for people who wanted our database of DVDs to get them through the post, rather than having to get in their car and go down to Blockbuster.” Coutu joined LinkedIn’s advisory board in 2007, when the group was still only present in the US and wanted to understand how to enter foreign markets. “The companies I formed as CEO were software databases that rolled out very quickly in several different countries, so I’ve got a speciality in market entry. […] I was interested in LinkedIn because they were a database of people who had skills, and other people, usually employers, who wanted to get access to those skills. That’s how it boils down, to marketplaces.”

Zoopla, which links sellers with buyers, adds property to the list of industries in which Coutu is invested. “So although it may look like LinkedIn is unconnected to DVDs, which are unconnected to selling houses, from a market place and a technology point of view they are very similar. What you’re doing is exploring different methods of monetising the ability to connect those who want things, with those who have things.” Care.com is arguably one of the most intrituing ideas in Coutu’s portfolio: the company provides a database for care providers, be it for seniors, children, tutoring, special needs, pets or housekeeping, previously a word-of-mouth marketplace which is now being organised.

“Care.com is targeting the Sandwich Mums. These are people exactly like me, who have parents on one side who require care in the home because they are getting old and fragile, and at the same time I have three kids who also require quite a few things. As I chose to work, there’s a variety of services that I surround myself with to help ease that,” says Coutu. “Women deploy a huge amount of purchasing power and make [care] decisions every day. I particularly identify with this service because I am squarely in the target market.”

The best problems
While she’s not necessarily a customer of every company she invests in, Coutu is driven to work with “phenomenal entrepreneurs” who are trying to solve problems that matter. “At least in my own mind, all the companies I spend time with make the world a better place from one angle or another. That’s what keeps me from going to bed at night, because I’m so excited about things. And it wakes me up early in the morning because I can’t wait … it’s almost like slaying another dragon. It’s exciting and worth pursuing.”

How much time Coutu spends with each of the companies in her charge depends where they are in their lifecycle. LinkedIn still requires about a day a month from her; Founders for Schools is in an intense phase right now, needing more than a day every week as Coutu gets them up the learning curve “and get the stuff out of my head into their heads”. DuoFertility requires half a day per week, as the founders are working on how to build their team ahead of entering the US market: “When they enter the US I can see a very clear £100m revenue that they can probably get in three years. That’s well worth at least half a day a week. I wish I had more time.”

While she assures me she’s had her fair share of failure, Coutu has faith in creating communities of people from different backgrounds as a means of solving problems. “The trick is to find a problem that other people think is worth solving. If the problem really is worth solving then lots of people want to help you, because it’s a good project to be involved with.” Coutu starts talking about Raspberry Pi, the maker of a $25 computer for education, which is a new board positions she’s very excited about. “All the other people there are basically these very, very deep semiconductor people, and here I am, sort of a … this mother-software-marketplace person.” She laughs. “I asked them why they wanted me there, and they said it’s because I’m really passionate about education. This is a tool for educating billions of people at a tenth of the price they had to pay previously.”

As the fastest-growing company to ever come out of Cambridge it’s easy to see why Coutu is excited about Raspberry Pi. But, I press, has she ever been wrong when calling a trend? While she won’t come out and say it directly, the answer here is clearly no: “I’m paranoid in terms of evidence of data and trends. My masters degree [at the LSE] was in econometrics, so if I’ve agreed a trend exists, I haven’t been wrong. I would put all of the failures I’ve had down to execution. Or being way ahead of the trend.”

Another dragon
With a plate fuller than most, Coutu still wishes she could do more, to pursue more opportunities and back more companies. “It’s really irritating to only be one person, and only have one life. It would be great if I could focus on one thing, but I’m curious about all sorts. I look at what’s going on in data and I wished I’d studied math better when I was a teenager; I look at some of the things that are being done in hardware and wish I understood physics better. But I think you have to accept that you have to prioritise, […] and believe in what you are trying to achieve.”

While she spends much of her free time with her three children, Coutu’s leisure activities of choice are mountain-climbing, sailing and swimming: “Every ten years I go climb Kilimanjaro again, because I’m boring, or I like to make sure I can still do it every ten years. In September I usually do the Alcatraz swim, where I jump off the ferry at Alcatraz and swim to San Francisco harbour.”

This is the moment where Coutu tells me she has two minutes left before she has to go; her next appointment has already arrived. I’m still stuck on the fact that she deems her repetition of Kilimanjaro as a somewhat boring pursuit, not to mention how hardened criminals would regularly die while attempting that very same swim. If this fearlessness is the same attitude she takes to her companies, it’s no wonder Coutu has such a strong success rate. “Well, they built a whole prison on Alcatraz on the premise that the swim was really dangerous,” Coutu laughs. “But’s not that far!”